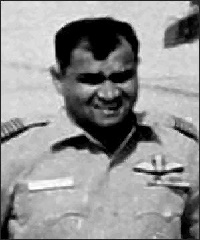 Wing Commander Krishan Kant Saini, Vr.C, AVSM (retd.) was born on 26 Oct 1931. He is an Indian Airforce helicopter pilot and belonged to the 104 Squadron. He got commissioned in the Air Force on 17 January 1953.He was a very accomplished helicopter pilot and won many plaudits for his skills in the air.

On 8 May 1969, he landed his Alouette SA-315 helicopter in the Karakorum range at an altitude of 6858 meters i.e. 22,500 feet. This was a world record in helicopter avionics. He was a very distinguished officer in the Air Force. He featured in the 1962 Sino-Indian war and carried out a daredevil evacuation mission on his helicopter in Walong area. He was being fired by the Chinese troops from all directions but that did not deter him. He completed his mission and saved many lives. He was awarded the gallantry award Vir Chakra for his contributions in the Sino- Indian war. Wing Commander Saini subsequently received Vayu Sena medal in 1970 for his gallantry. He also received Ati Vishisht medal for his meritorious service in the year 1974.

Flight Lieutenant Krishan Kant Saini had been operating in NEFA area since October, 1960. On 18th November, 1962, he, along with his co-pilot was evacuating seriously injured battle casualties in Walong area. He was instructed to land at a helipad close to the enemy line which was reported to be clear of enemy troops. When he was over the helipad, Chinese troops opened fire from many directions. His helicopter was hit at several places; the main reducter was damaged and oil from it gushed out in a thick spray which blinded him temporarily. His right ankle was also injured by a splinter and he was bleeding profusely. With great determination, presence of mind and skill, he dived the helicopter almost to ground level to avoid further damage from enemy fire. He thus saved the helicopter and the lives of his co-pilot and passengers. In spite of the damaged hydraulic system and the personal injury, he skilfully brought the aircraft back to base.