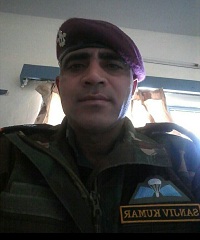 Subedar Sanjiv Kumar was born on 05 Dec 1977 and hailed from Dehra village in Bilaspur district of Himachal Pradesh. He completed his schooling from HP board of School Education Dharamshala and then joined the Army on 30 Aug 1996 at the age of 18 years. He was recruited into 4 Para (SF) battalion of the Parachute Regiment, an elite infantry Regiment well known for its daredevil para commandos and numerous bold operations.

After completing his training he served in various operational areas and had a stint with the National Security Guard (NSG) too. By the year 2020, Sub Sanjiv Kumar had put in over 20 years of service and evolved into a battle-hardened soldier and a very dependable junior commissioned officer of the unit.

During Apr 2020, Sub Sanjiv Kumar’s unit was deployed in the Kashmir valley for counter-insurgency operations. Sub Sanjiv Kumar in his fairly long service had taken part in numerous challenging operations and had gained substantial experience in counter-insurgency operations. Based on the information from the intelligence sources about the infiltration attempt by the terrorists in the Kupwara district, the security forces launched “Op Randori Behak” on 01 Apr 2020. The soldiers deployed in Karen sector repeatedly picked up and lost track of the terrorists as they infiltrated across the Line of Control. On 03 April the troops picked up the trail at 4:30 pm and again at 6:30 pm on 04 April 4. It was then decided to launch Para commandos by dropping them by air near the suspected area. Sub Sanjeev Kumar became part of this operation launched by the 4 Para(SF) battalion. Based on the information gathered through UAV(Unmanned Aerial Vehicle) of the Army intelligence network, the operation was planned on 05 Apr 2020 to foil an infiltration attempt in the Karen sector. Sub Sanjeev Kumar was tasked to lead that operation along with a team of para commandos. As the suspected area was snow-covered and inaccessible the assault team was planned to be airdropped to integrate an element of surprise too in the operation.

The two squads of the elite para commandos led by Sub Sanjiv Kumar were airdropped in the suspected area as planned in poor visibility conditions. But soon the team spotted the footsteps of the terrorists in the snow and decided to follow the trail. As the soldiers were following the snow-bound trail, at one point the hardened snow under their feet gave way plunging three members of the team into a nullah. However, the soldiers after tumbling down reached a place very near to the hideout of the terrorists. A fierce gun battle followed immediately as the soldiers came face to face with the infiltrators. Seeing their comrades under heavy fire, the other two soldiers who had managed to evade the collapsing snow also rushed to the place of action. In the ensuing heavy exchange of fire the para commandos team led by Sub Sanjeev Kumar managed to eliminate all the five terrorists.

However as it was combat at very close quarters, the soldiers too received multiple gunshots and got seriously injured. Three soldiers succumbed to their injuries and were martyred in the battle zone itself. The other two soldiers were airlifted to a nearby military hospital but they too succumbed to their grievous injuries and were martyred. Besides Sub Sanjiv Kumar the other martyred soldiers included Hav Davendra Singh, Paratrooper Bal Krishan, Paratrooper Amit Kumar, and Paratrooper Chhatrapal Singh. Sub Sanjeev Kumar was a valiant soldier and an inspiring junior commissioned officer who led from the front and laid down his life in the line of his duty. Sub Sanjeev Kumar was given the nation’s second highest peace time gallantry award, “Kirti Chakra” for his outstanding courage, devotion to duty and supreme sacrifice.

The citation for the ‘Kirti Chakra’ awarded to him reads :

On 04 April 2020, Subedar Sanjiv Kumar was the leading Squad Commander of the Special Forces detachment which was heli-dropped in Keran Sector to intercept and eliminate an infiltration track of Pakistan-sponsored terrorists.

Subedar Sanjiv Kumar sacrificed his own life in the highest tradition of the Indian Army.