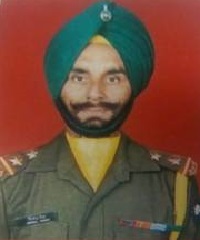 Subedar Nirmal Singh hailed from Purana shalla village in Gurdaspur district of Punjab. Son of Shri Dhana Singh and Smt Shanthi Devi, Sub Nirmal Singh joined the Army before he could turn 20. He was enrolled into the 8 Sikh battalion of the Sikh Regiment, an infantry Regiment. known for its fearless soldiers and a rich history of numerous battle honours. By 1999, Sub Nirmal Singh had put in service of over two decades and developed into a motivated junior commissioned officer.
Tiger Hill Attack(Kargil war) – July 1999
During the Kargil Conflict of 1999, Sub Nirmal Singh’s unit 8 Sikh was inducted in Drass on 14-15 May 1999, under the command of 121 Infantry Brigade. Later 192 Mtn Bde was tasked to capture the Tiger Hill and 8 Sikh along with 18 Grenadiers battalion was allocated to the the Brigade. A multi-directional attack was planned from three directions on 03/04 July 1999 with 18 Grenadiers leading the attack and 8 Sikh providing the firm base. Tiger Hill at height of 5062 m was by far the most dominating feature in the Drass sector and overlooked Mushkoh valley and the national highway NH-1D. It was divided into a number of smaller objectives.    The western spur was divided into a number of parts from east to west  viz. India Gate, Helmet and Rocky Knob; and the southeast side was called Tongue. The terrain was extremely rugged with gradient rising up to 80 degrees at some places.
In order to inflict casualties the enemy positions on Tiger Hill it was subjected to heavy artillery and mortar fire. On the night of July 3rd, 18 Grenadiers captured the eastern slope but further advance was held up due to effective enemy fire from Helmet and India Gate features on the western slope.  On 5 July 1999, Sub Nirmal Singh was tasked to lead one of the three teams to establish a firm base and by midnight, all the three teams were suitably poised for the capture of India Gate, Helmet and Rocky Knob. As the war cries of “Bole So Nihal, Sat Siri Akal” rent the air, the men got going and all hell broke loose. Intense enemy shelling and direct firing opened up. Sub Nirmal Singh  and his comrades displayed outstanding bravery and aggression in clearing the bunkers one after another. By 4 am, India Gate and Helmet had been captured.
The attacking troops, in the meanwhile, had firmed up defences in an area 700 meters by 500 meters. Apprehending a violent retaliation from the enemy, all preparations for repulsing any attack were made.  Sub Nirmal Singh and his men despite being seriously wounded kept engaging the enemy with extreme bravado and courage and continued fighting till the last man and the last round. During this Operation, Sub Nirmal Singh single-handedly took on the enemy from close quarters and kept motivating the troops to complete the assigned task. However Sub Nirmal Singh later succumbed to his injuries and was martyred. The bravery of Sub Nirmal Singh and his men paved the way for the capture of Tiger Hill eventually three days later.  Sub Nirmal Singh was a dedicated soldier and an inspiring Junior Commissioned Officer who led his men from the front and laid down his life in the service of the nation.
Sub Nirmal Singh was given the nation’s third highest gallantry award, ” Vir Chakra” posthumously for his exceptional courage, unyielding fighting spirit and supreme sacrifice.

On 5 July 1999, Subedar Nirrmal Singh was leading a small team to establish a foothold on an objective in Drass sub sector during ‘Op Vijay’. While assaulting, Subedar Nirmal Singh noticed enemy movement. But before enemy could react, he directed fire of own automatic weapons on enemy and inflicted heavy casualties. The enemy was forced to retreat. Subedar Nirmal Singh quickly approached the objective and captured it. Rest of the company followed up next day and reorganized defences. Subedar Nirmal Singh deployed his platoon on forward slope.

At 0600 hrs, enemy opened fire and followed it up with a counter attack on the position held by Subedar Nirmal Singh’s men. Subedar Nirmal Singh and his men despite being seriously wounded kept fighting the enemy with extreme bravado and courage and continued fighting till the last man last round. They kept the enemy away till they all succumbed to their fatal injuries. During this Operation, Subedar Nirrnal Singh single-handedly took on the enemy face to face, at close quarter motivated the troops around him to mount an assault on the enemy and to repulse the counter attack by making the supreme sacrifice of his life in the highest traditions of the army.