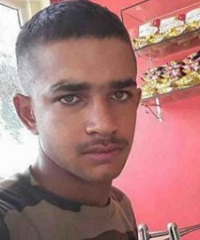 Sepoy Sachin Sharma (19) a young Indian soldier, was a resident of  Goela Khurd village in Bapoli block. He had two sisters Ritu, Anju and a brother Sahil. Since his childhood Sachin sharma had a strong desire to join the army to serve the nation. As soon as he finished his 12th standard,  on 12th December 2016, he was inducted into the Army and later got posted to 16th battalion of Rajputana Regiment. Sepoy Sachin Sharma took his initial training at the Rajputana Regiment Headquarters in Fatehgarh of Uttar Pradesh.

He was a very good Kabbadi Player and was a star raider of the team. He was good in other sports also and had won many prizes in the sports activity of the unit . His friends recall him as person who would work very hard to pursue his dream.  When he could not afford  running shoes during the preparation for joining the army, he started running barefoot on the river Yamuna bank and soon made himself fit enough for the selection standard.

In November 2017, Sepoy Sachin Sharma was posted at Twang district of Arunachal Pradesh. His unit was  deployed near the India-China border. On 16th January 2018, when he was patrolling in the area  120-150 km at Arunachal Pradesh, he started vomiting  and soon blood started coming out in the vomit. Later , he succumbed to it and lost his life. India lost a spirited and motivated son.

Just a day Prior to his death he had called up his mother and had informed that he would come home soon as his leave for two months starting from 5th February has been approved, unfortunately he would not be able to keep his words to his parents and all his loved ones. His last rite was attended by large number of residents, army officials and well known people of the area.

Sepoy Sachin Sharma is survived by his parents , sisters and brother.