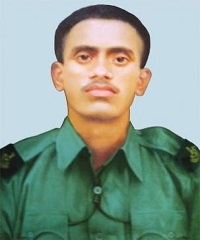 Sepoy Pandurang Salunke was born on 1st May 1950, in the village of Manerajuri in Sangil district of Maharashtra. He joined the army at a young age and was enrolled into 15 MLI of the Maratha Light Infantry Regiment, an infantry Regiment known for its gallant soldiers with a long history of numerous battle exploits.

During 1971, Sep Pandurang Salunke's battalion 15 Maratha Light Infantry was deployed in defensive positions in area North East of Amritsar over a broad frontage. As the war broke out on 03 Dec, functioning under 15 infantry Division, 15 MLI was tasked to take up a Battalion Defended Area centered on Madh, astride the Saki Nala to deny Axis Fatehpur-Lopoke. The Unit threw out screens at Chhan Kalan, Tur and Bhindi Aulakh villages and positioned a fighting patrol at Vera (Vehra). It also strengthened the Border Security Force (BSF) outposts of Fatehpur, Burj and Ghoga in its area. The formation was allotted a field Regiment in direct support and had a Vijayanta Squadron of 66 Armoured Regiment under command.

A Company 43 Baluch of Pak army attacked Burj post on December 6 in daylight in eminently open tank country but inexplicably without armour. The 15 MLI troops brought on withering fire and caused heavy casualties on the Pakistanis who fell back shell-shocked. The Company Commander Major Ranbir Singh decided to attack and retake Burj along with the armour under his command. Planned for much earlier, the attack with minimum recce, went in at 1645h on December 6. It involved the Infantry attacking Burj from two directions with the troop tanks approaching Burj from the rear and cutting off both the post and retreat.

The fighting on the Dhussi Bund and beyond was brutal and bitter. Sep Salunke, seeing an RL about to fire at a 66 Armoured Regiment tank from close quarters, went and got hold of the weapon, shooting the firer. But while doing so, Sep Salunke received burst on his body; a dare-devil act like no other. Sep Salunke succumbed to his injuries and was martyred. Sep Salunkhe displayed outstanding courage and determination during the battle and laid down his life at at the age of 22 years in the line of his duty.

During an assault by a battalion of the Maratha Light Infantry, supported by armour, an enemy rocket launcher posed a threat to the tanks assaulting with the infantry. Realizing the danger to our tanks, Sepoy Pandurang Salunkhe, at great risk to his life, charged towards the rocket launcher, jumped on the enemy and physically snatched away the rocket launcher even though he received a burst of stengun fire at pointblank range. In this action, Sepoy Salunkhe displayed indomitable courage and determination of a very high order.