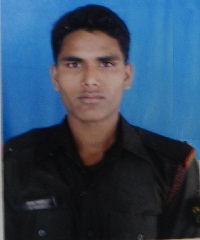 A native of Ghazipur village in Uttar Pradesh, Sepoy Harinder Yadav (26) belonged to  6 Bihar Regiment of the Indian Army. He was among the 19 brave hearts who laid down their lives in the line of duty in September 2016 when Pakistani terrorists struck the Army’s Administrative base in Uri sector of J & K.
Sepoy Harinder Yadav supported a family that included his wife, two sons, parents, four elder and younger brothers and their families. He was the only one with a government job. Harinder had joined the Army in 2007 and had got married in 2011.

The nation will remain grateful to this brave soldier for his courage and supreme sacrifice. Sep Yadav is survived by his parents, wife and two sons, Rohit, 4, and Raj, 2.