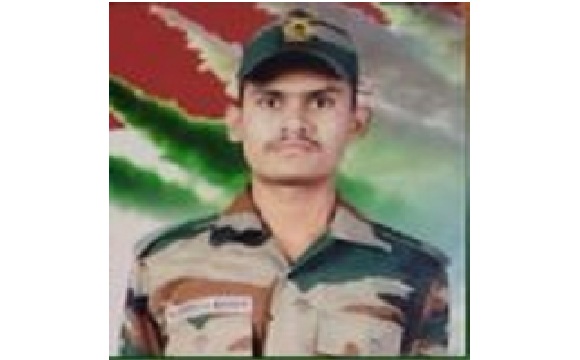 Arm/Regt : The Corp of Engineers

Sapper Sangi Reddy Sanjeeva Reddy hailed from KS.pally village in Giddaluru Mandal tehsil of Prakasam District in Andhra Pradesh. He joined the Army after completing his school education and was recruited into 3 Engr Regt of the Corps of Engineers, the important combat support arm of the Indian Army.

During 2020, Sapper Sangi Reddy Sanjeeva Reddy's unit 3 Engr Regt was deployed in North Sikkim near the Indo-China border. The AOR(Area of Responsibility) of the unit spanned over remote rugged mountainous terrain with extreme weather conditions specially in the winter season. The troops were deployed on various forward posts and often undertook patrol to monitor the area in between the manned posts. Sapper Sangi Reddy and his comrades from 3 Eng Regt provided engineering support services to the troops from other units. The heavy snow fall often blocked the roads and hampered the movement of troops which necessitated frequent clearance operations. Sapper Sangi Reddy was undertaking one such snow clearance operation with a dozer on 06 Apr 2020. As the operation was underway, a horrific avalanche struck him.

The magnitude and suddenness of the avalanche did not give him any time to take any evasive actions. As a result Sapper Sangi Reddy got trapped under tons of snow. A massive rescue operation was launched with more than 250 military personnel along with helicopters, tracker dog, snow avalanche rescue dog and other support equipment.  The rescue team eventually managed to locate his body on 11 Apr 2020, but by that time he had lost his life owing to prolonged exposure to extreme cold conditions. Sapper Sangi Reddy was a brave and committed soldier, who laid down his life in the line of his duty.

Sapper Sangi Reddy Sanjeeva Reddy was given the gallantry award, “Sena Medal” on 26 Jan 2021 for his courage, camaraderie, devotion to duty and supreme sacrifice.