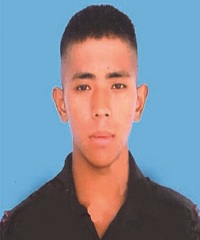 Rifleman Sunil Rai hailed from Algarah village of Kalimpong tehsil in Darjeeling district of West Bengal and was born on 27th December 1994. Son of Shri Somnath Rai and Smt Sita Rai, Rfn Sunil Rai had two brothers Vinesh Rai and Sachin Rai. He joined the Army at the age of 17 years on 07 Dec 2013. He was recruited into 2/11 GR of 11 Gorkha Rifles Regiment, a Regiment known for its fearless soldiers and numerous battle exploits.

During 2016, Rifleman Sunil Rai’s unit, 2/11 GR was deployed in Turtuk sector of Ladakh. As the area under the responsibility of 2/11 GR was very active and volatile the unit troops had to maintain a high state of alert at all times. The unit launched regular patrols to monitor the area for any suspicious activity. Rfn Sunil Rai and Lance Hav Bhawan Tamang were part of one such patrol on 25 Mar 2016. There was heavy snowfall in J & K area in Mar 2016, resulting in multiple avalanches in Jammu and Kashmir. As the patrol team was on its way through the treacherous terrain, battling very hostile weather, it got struck by a horrific avalanche.

The avalanche was very sudden and trapped the soldiers without giving them any reaction time. Rfn Sunil Rai and Lance Hav Bhawan Tamang got buried under tons of snow and could not be reached immediately. A massive rescue operation was launched by the Army using special implements but the inclement weather made the task very difficult. After struggling for few hours the body of Lance Hav Bhawan Tamang was recovered who later succumbed to his injuries. However, the body of  Rfn Sunil Rai could be recovered only on the next day. As enough time had elapsed after the incident Rfn Sunil Rai could not be saved. Rfn Sunil Rai was a valiant and dedicated soldier who laid down his life at the young age of 21 years in the service of the nation.