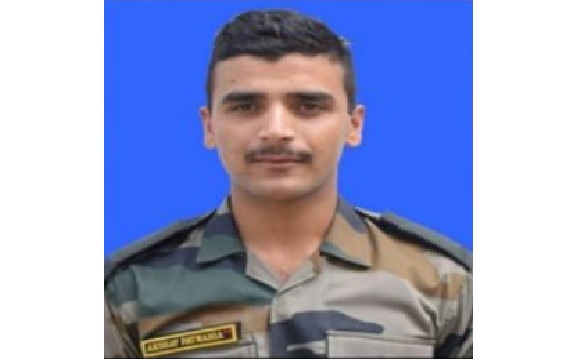 Rifleman Akshay Pathania hailed from Chakkad village in Pathankot district of Punjab and was born on 07 April 1998. Son of an army veteran Hav Sagar Singh Pathania and Smt Ritu Pathania, he had a brother Amit and sister Raveena as his siblings. Youngest of the three siblings, Rfn Akshay Pathania did his schooling from Sawan Senior Secondary School, Haryal Chakki. He was fascinated with army life and nursed a dream of joining the army since his childhood.

Consequently, he joined the army in the year 2016 at the age of 18 years after completing his 12th class. He was recruited into the 19 JAK Rif battalion of the Jammu and Kashmir Rifles Regiment, an infantry Regiment known for its brave soldiers and rich history of various battle honours. By 2022, he had complete around five years of service and developed into a tough and devoted soldier.

During 2022, Rfn Akshay Pathania's unit 19 JAK Rif was deployed in the West Kameng district of Arunachal Pradesh near the Indo-China border. The AOR(Area of Responsibility) of the unit spanned over remote rugged mountainous terrain with extreme weather conditions, especially in the winter season. The unit troops were deployed on various forward posts and often undertook patrol to monitor the area in between the manned posts. The area, located at an altitude of 14,500 feet, witnessed inclement weather with heavy snowfall in the first week of Feb 2022. The area also recorded 90 mm rainfall between January 1 and February 8—more than 20% excess than normal.  Also, heavy snowfall often blocked the roads and hampered the movement of troops which necessitated frequent clearance operations. Rfn Akshay Pathania was part of one such patrol cum snow clearance team on 06 Feb 2022.

As the troops were traversing through the planned route in the Chume Gyater area near Yangtse, closer to the China border, a horrific avalanche struck them. The magnitude and suddenness of the avalanche did not give any time to Rfn Akshay Pathania and his comrades to take any evasive actions. As a result, Rfn Akshay Pathania and six other soldiers got trapped under tons of snow. A massive rescue operation was launched by the army and specialized equipment too were airlifted to aid the search. After searching for nearly two days, the rescue team eventually managed to locate the bodies of the soldiers on 08 Feb 2022, but by that time they had lost their lives owing to prolonged exposure to extreme cold conditions. Besides Rfn Akshay Pathania, the other brave hearts included Hav Jugal Kishore, Rfn Arun Kattal, Rfn Vishal Sharma, Rfn Rakesh Singh, Rfn Ankesh Bhardwaj and Gnr Gurbaj Singh.  Rfn Akshay Pathania was a brave and committed soldier, who laid down his life in the line of his duty.