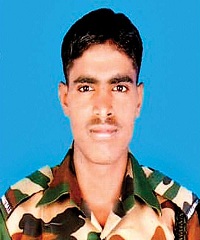 Naik Gosavi Keshav Somgir hailed from Sri Rampur village of Nashik district in Maharashtra. He was a brave and committed soldier who lost his life in the unprovoked violation of ceasefire by the Pakistani army troops when they opened fire on the army post along the line of control on 11th Nov 2018 at Rajouri district in J & K.

During Nov 2018, Naik Gosavi Keshav Somgir’s unit 24 Maratha Light Infantry was deployed in the Nowshera sector near LOC  in Rajouri district and was manning the forward posts. On 10th Nov Naik Gosavi Keshav Somgir was deployed at the forward post of Kalal area in Nowshera Sector. This sector near the LOC was very restive and volatile as the enemy forces often resorted to unprovoked firing from across the border.

At around 2:45 pm on 11 Nov, the sniper shots were fired near Raja post of 24 MLI battalion by the Pakistani army. The army retaliated in a befitting manner resulting in a heavy exchange of fire. During this firing, Naik Gosavi Keshav Somgir got wounded seriously and was taken to the nearby military hospital. However, he later succumbed to his injuries and was martyred. Naik Gosavi Keshav Somgir was a disciplined and committed soldier who at the age of 29 years laid down his life in the service of the nation.