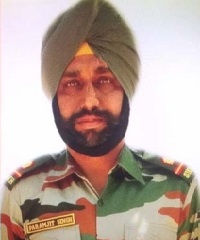 Naib Subedar Paramjit Singh was born into a humble Sikh family in the village of Veinpoin in Taran Taaran district of Punjab. Son of Sri Udham Singh and Smt Gurinder Kaur, Nb Sub Paramjit Singh was recruited into 22 Sikh of the famed Sikh Regiment, a regiment known for its gallant soldiers and numerous battle honours.

During 2017, Nb Sub Paramjit Singh’s unit was deployed in Poonch district of J & K along the LOC. On 01 May 2017, the security forces received intelligence reports that Pakistani forces had intruded into the Indian territory in the Krishna Ghati sector in Poonch district near the LOC and planted landmines. A decision was taken to launch an operation to verify the reports and take suitable action. Consequently, a joint team of Army and BSF was tasked to undertake the operation and Nb Sub Paramjit Singh was chosen to be part of that team.

The joint team set off for the assigned task and reached the suspected area as per the plan. Around the same time, a Pakistani special forces team under the cover of artillery fire sneaked 250 meters into the Krishna Ghati sector in the Poonch district near the LOC. As Nb Sub Paramjit Singh and his soldiers were looking for landmines, the joint patrol was taken by surprise by Pakistan’s Border Action Team (BAT) that had laid an ambush over 250 meters inside the Indian territory. The Pakistani Army attacked two FDLs (Forward Defence locations) with rockets and mortar bombs and kept them engaged while the BAT teams targeted the patrol party, led by Nb Sub Paramjit Singh.

The ferocity of sudden ambush by numerically superior enemy force caused the patrolmen to run for cover and withdraw towards the Indian side of the border. However, two members of the patrol party got left behind, who were then attacked by the BAT team and brutally killed. Nb Sub Paramjit Singh was one of them who lost his life in this dastardly attack. His body was mutilated and the entire country was deeply anguished by this barbaric act of cowardice committed by the enemy. Nb Sub Paramjit Singh was a valiant and committed soldier who laid down his life in the line of his duty.

The Punjab government offered a compensation of Rs 12 lakh partly in cash and the rest as fixed assets to Nb Sub Paramjit Singh’s wife and children besides offering Rs 2 lakhs to his aged parents.

The Punjab government has granted free education facility for his children up to degree courses at one of the nine Sainik Institutes of Management and technology in the state.

An IAS-IPS couple from Himachal Pradesh has offered to look after Khushdeep Kaur, the younger daughter of Nb Sub Paramjit Singh until she finishes her education and gains financial independence.