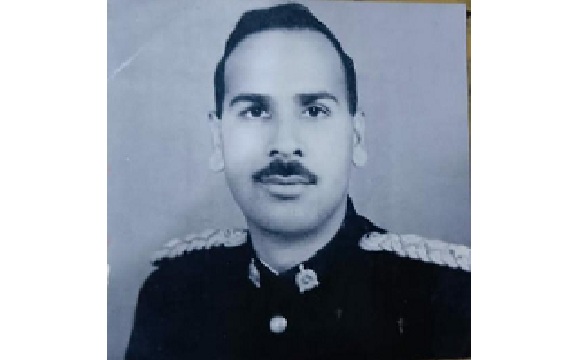 Major RP Kaushik hailed from Phusgarh village in Karnal district of Haryana. Son of Shri Parmanand Kaushik and Smt Laxmi Kaushik, he was eldest among three brothers. His one brother Shri Ved Prakash Kaushik became an educationist while the other brother Shri Chander Prakash Kaushik too joined the Army and later retired as a Captain. Maj RP Kaushik did his schooling at Shahbad in Haryana and later went to college to study at Lyallpur Khalsa College, Lahore. After completing his education, he got selected to join the Army and went to IMA Dehradun for training.

He was commissioned as a 2nd Lt in an infantry battalion. Soon he honed his field craft skills in varous operational areas and developed into a tough soldier and fine officer. He later also got selected to attend the prestigious course at Defence Services Staff College at Wellington, a tri-service Institute for officers’ training. After putting in few years of service he got married to Ms Laxmi and the couple had a son and two daughters. By 1962, he had put in substantial years of service and had been promoted to the rank of Major.

During the 1962 Indo-China war, Maj RP Kaushik was serving with 4 Infantry Division HQ. The Headquarters of 4 Infantry Division, which was located in Ambala prior to the worsening Sino-Indian relations, was moved to the North East in 1959 and was located initially at  Tezpur. During the war, it had its tactical headquarters at Zemithang and at Dirang Dzong in Kameng Frontier Division of NEFA (North East Frontier Agency). During that period Maj RP Kaushik was serving as Deputy Assistant Adjutant and Quartermaster General or simply called as DQ at 4 Inf Div HQ.

4 Inf Div consisted of primarily three brigades viz. 7 Inf Bde, 5 Inf Bde and 4 Arty Bde. 7 Inf Bde consisted of 9 Punjab and 1 Sikh both at Tawang and 1/9 GR at Misamari. Later 2 Rajput, 4 Grenadiers and 5 Assam Rifles battalions and a company of 6 Mahar also saw operations under the brigade. 5 Inf Bde was removed from operational control of 4 Inf Div and was directly under Headquarters, 33 Corps as per the modified operational plan. 4 Arty Bde had a number of field regiments under its command including elements from 34 Heavy Mortar Battery, 5 Field Regiment (95, 96 and 97 Field Batteries), 6 Field Regiment (86, 87 and 88 Field Batteries), 22 Mtn Regt (7 (Bengal) and 2 (Derajat) Mountain Batteries) and 116 Heavy Mortar Battery (from 33 Medium Regiment). Maj RP Kaushik as DQ of the Div had a responsibility of coordinating with a large number of units for ever changing requirements during the war.

7 Infantry Brigade faced defeat at the Namka Chu ridge on 20 October 1962 during the war. Consequently the tactical Headquarters of 4 Infantry Division withdrew from Zemithang on the morning of 21 October 1962. Tawang Garrison with two infantry Battalions and three artillery batteries was abandoned on 23 October 1962. As a result, Maj RP Kaushik and his comrades moved to Dirang Dzong south of Tawang. The second phase of the Chinese attack commenced on 17 November 1962, after a lull of 23 days. When the attack commenced on 17 Nov, Maj RP Kaushik was in a bunker along with 4 other soldiers. During the heavy exchange of fire, Maj RP Kaushik received shell splinters in both knees and was unable to move.  As the Chinese forces were advancing, Maj RP Kaushik needed to be shifted to a safer place.

However sensing grave danger to the lives of his fellow soldiers, Maj RP Kaushik ordered them to leave him alone and move. Maj Kaushik displayed courage and camaraderie of a very high order in order to save the lives of his comrades. Maj RP Kaushik's whereabouts could not be known thereafter and he was declared "Killed in Action" after almost 9 months. Maj RP Kaushik was a valiant soldier and an officer par excellence, who led from the front and laid down his life in the line of his duty, following the highest traditions of the Indian Army.

Major RP Kaushik is survived by his son Dr Ashok Kaushik settled in Dehradun and daughter, who stays in Delhi.