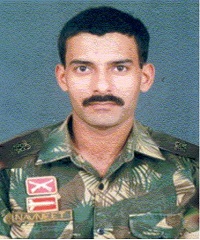 Major Navneet Vats hailed from Chandigarh. Son of Shri Niraj Vats and Smt Veena Vichitra, he always wanted to don the ‘Olive Green’ uniform. Following his dream, Maj Navneet joined the Army and was commissioned into the Fourth Battalion of 3 Gorkha Rifles Regiment, a Regiment known for its gallant soldiers and various battle honours. He was a dedicated soldier and an officer par excellence, who always led his men from the front.

After serving for few years, Maj Navneet got married to Ms Shivani and the couple had a daughter, Inayat. The little Inayat filled their life with wonderful moments and lots of happiness. Their life was full of love and joy until the fateful day of November 20, 2003.

Maj Navneet after serving for a couple of years with his unit was posted to Srinagar on deputation to 32 Rashtriya Rifles. 32 RR was engaged in counter-insurgency operations and faced challenging situations on a regular basis. On 18 Nov 2003, a group of terrorists occupied a telecom building in Srinagar and the security forces decided to launch a joint operation to deal with the crisis. After a standoff over two days, it was decided to storm the building on the fateful day of 20th November 2003 to neutralize the terrorists.

Maj Navneet was tasked to lead the assault team for the critical operation. It was a very risky mission as the terrorists were hiding in safe positions inside the building and were using automatic weapons. Maj Navneet who was a committed soldier with a steely resolve decided to take up the challenge and stormed the building, leading from the front. Maj Navneet and his resolute men displayed exemplary courage and daredevilry to storm into the building. As the militants were well positioned inside, they attacked the team with heavy fire. It was not an easy task to advance under the heavy firing but these brave men moved forward courageously to neutralize the militants.

During the intense crossfire, Major Vats was shot by six bullets in his torso and four other brave soldiers, including a Colonel, were severely wounded. These gunshots left Maj Navneet profusely bleeding and he later succumbed to his injuries. Maj Navneet showed outstanding courage and leadership during the operation and laid down his life in the service of the nation. Maj Navneet Vats was given the gallantry award, “Sena Medal” for his bravery, unyielding fighting spirit, and supreme sacrifice.

Maj Vats’s body was flown in from Srinagar to his home town of Chandigarh and kept in the Command Hospital, Chandimandir. He was cremated with full military honours on 21st November 2003 at Manimajra Cremation ground.  A ceremonial guard from 5 Gorkha Rifles, reversed arms while the bugler sounded the last post. A three-shot volley was also fired by the jawans from Gorkha regiment as a gun salute.

Col Manvendra Singh laid the wreath on behalf of the GOC-in-C, Brig V.P. Kushwaha on behalf of the Chief of Staff, Western Command and Col A.S. Chandhok on behalf of the Station Commander, Chandimandir. The Deputy Commissioner, Panchkula, Mrs. Satwanti Ahlawat, DSP Headquarters, Mr. Deshbandu, and Prof Harbans Lal Sagar and his wife, Major Sandeep Sagar and the parents of the martyr, Mr. Niraj Vats and Mrs. Veena Vichitra, also laid wreaths. Mrs. Shivani handed over flowers to her daughter, little Inayat, who also paid floral tribute by placing the flowers near the face of her brave father.

Maj Vats left behind his parents, a differently-abled brother, wife, and a three-year-old daughter.  The family has stood by courageously since that day, which changed their lives forever. When the mortal remains of Maj Vats had arrived at his home, his father had conveyed that they were proud to be parents of a brave son who fought for the honour of his motherland.

Mrs. Shivani Vats has also moved on in life with the same courage and valour as displayed by her husband. She believes that her silent soldier is always standing beside her and giving her the strength to go ahead with her duty. She is serving as an Army School teacher and their daughter Inayat, now grown up takes immense pride in the fact that her father fought for the honour of his country and displayed the true spirit of ‘Service before Self.’