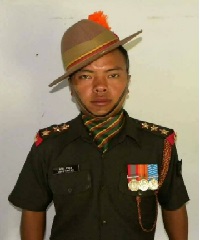 Major David Manlun hailed from Churachandpur district in Manipur and was born on 27 Jul 1985 in Imphal, Manipur. Son of an army veteran Subedar M Khamzalam, Major David Manlun had four siblings. His elder brother is serving with the Army and sister is married to an Army officer Col Ashutosh Kumar.  Maj David since his childhood had a keen interest in sports and represented his team at various levels.

Maj David loved music and was a good guitarist and vocalist. He also had a flair for languages and in addition to English, Hindi, and his mother tongue Zou, he was proficient in many languages that included Mizo, Kuki, and Paite. Maj David was a person full of life and was loved by his family, friends, and colleagues. Maj David Manlun finished his schooling from Army Public School, Shillong and graduated from St Anthony’s College Shillong in the year 2006. In 2009 he joined the Officer Training Academy, Chennai. In Mar 2010 he was commissioned into the 1st Battalion the Naga Regiment, an infantry Regiment known for its intrepid soldiers. He joined the battalion at Naugam in J& K and served there for the next two years and took part in a number of operations.

After a stint of peace station at Bakloh in Himachal Pradesh, Maj David was posted in Nagaland with 164 Inf Bn TA (NAGA) in 2014.  He was awarded the Chief of Army Staff Commendation in recognition of his exemplary service on 15 Aug 2016. Having almost completed his tenure of Nagaland, Maj David had opted for deputation to National Security Guard for which the probation was to begin on 23 Jun 2017

On receiving intelligence reports about the presence of militants in the Lappa area, close to Myanmar border, the security forces decided to launch a joint operation on 06 June 2017. The militants were suspected to be from ULFA(I) and SS Khaplang faction of the National Socialist Council of Nagaland (NSCN-K), who was very active in the Mon district of Nagaland. A joint operation by a combined team of the Para commandos and the 164 Inf Bn of TA, was launched.

The combined team swung into action and launched a search and destroy mission in Lappa area in Mon district of Nagaland. The area was approximately 325 Kms from Kohima, the capital of Nagaland, and 25 Kms from Myanmar border. Maj David was leading the team in the mission when the militants fired at them. Maj David led from the front and counter-attacked, directing his troops. However, the militants were heavily armed and were using automatic weapons and grenades. During the fierce gun-battle, Maj David got injured and was martyred.

Inspired by the leadership of Maj David, his troops counter attacked the militants and the successful operation led to the recovery of huge quantity of arms and ammunition from the militants. Maj David displayed courage and leadership of a very high order in the face of the enemy and proved his mettle as a dedicated and committed soldier. Maj David Manlun was given the nation’s second highest peacetime gallantry award, “Kirti Chakra” for his outstanding grit, determination, leadership and supreme sacrifice.

Citation for the kirti Chakra Awarded to him reads:-

Based on a specific intelligence developed by Major David Manlun, an operation was launched in Northern Nagaland in June 2017. During the said operation at around 2200 hrs, contact with a group of militants was established by the column Major David Manlun.

A fierce firefight ensued immediately, wherein the militants lobbed grenades towards the position of Major David Manlun injuring him and three other ranks. Despite bearing the brunt of militant’s fire and grenade blast Major David Manlun with utter disregard to his personal safety moved forward and opened fire from close range to pin down the militants, thus preventing them from causing further casualty to own troops and eliminated three militants. Major David Manlun succumbed to his injuries shortly thereafter. The killed militants were hardcore cadres of ULF(I) and were involved in numerous incidents of violence in Upper Assam.

Major David Manlun displayed conspicuous personal bravery and leadership of the highest order and made supreme sacrifice in fighting with the militants.

Siampu Manlun, brother of Maj David Manlun, paid tribute to his brother on his “Day of Martyrdom” on 06 Jun 2017…..

Maj David Manlun or “uvid” as I would call him, was my best friend and guide whom I looked up to, in every aspect of my life. Today, on the 3rd anniversary of his supreme sacrifice I miss him, but at the same time a stream of memories is flooding my mind. While growing up, we three brothers and our youngest little sister would always be together and bonded very well.

uvid’s naughty tricks and the warnings of our exasperated mother still bring smile on my face though at times with a tinge of sadness. The crazy and unforgettable memories of growing up years with ‘uvid’ are many but some special ones include wrestling (WWE style), playing Kungfu Jackie Chan and Jet Li style and riding wooden trolley made from ball bearings. However as we grew older our ‘getting together’ became less frequent as my eldest brother Jimmy (U’ei) joined the Army and so did ‘uvid’ followed by our sister who got married to an Army officer. With Dad having retired from the Army, we became truly a “Fauji Parivar”.

uvid’s enthusiasm and free spirit was contagious, making those around him feel good and happy-just like him. Through the years, uvid became an inspiration for me. I still remember his words which he learnt in the Army and would often quote, “it is all about your mentality, physical strength might give up but it is your mentality that will keep you going.” His hard work and dynamism would always make him the “first in everything” in our family. He was interested in everything – be it sports, music and adventurous outings and sports. He carried his enthusiasm and leadership quality everywhere and gave his hundred percent to his every commitment. Following this very path he laid down his life in the line of his duty and received the gallantry award, “Kirti Chakra”.

I had never thought that my brother would leave us so soon. Our Mom still feels that he would come back one day and take the family out for dinner as he always did. I have noticed Mom secretly crying, seeing his friends and at times looking out of the window and staring expectantly till her eyes well up with strain. We undoubtedly miss him a lot but at the same time we take immense pride in being called the family of Maj David Manlun – the national ‘Hero’.