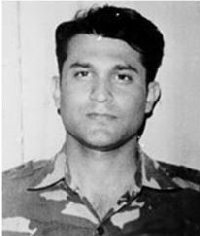 Major Ajay Kumar Jasrotia was born on 31 Mar 1972 and hailed from Jammu in J  & K. Son of Shri Arjun Singh Jasrotia and Smt Beena Jasrotia, Maj Ajay did his schooling in his hometown and later graduated from Commerce college in Jammu. He belonged to a military family wherein his grandfather Lt Col Khajoor Singh served in the Army and his father served as a DIG in BSF. He too was inclined to join the Armed Forces since his younger days and followed his dream after graduation. He got selected through the Combined Defence Services a Examination  and joined the Army in 1996 at the age of 23 years.

He was commissioned into 13 JAK Rifles of the J & K Rifles Regiment, an infantry Regiment known for its gallant soldiers and numerous battle exploits. During 1999, Maj Ajay Singh Jasrotia’s unit was deployed in Sopore in J & K but was moved to Drass region in June as part of Operation Vijay.

In June 1999, Maj Ajay Singh Jasrotia’s unit moved to Drass region under the command of 56 Mountain Brigade. In Drass the enemy had secured Tololing, Point 5140, Point 5060, Point 4700 ridgeline extending towards northwest till Point 5353 and Tiger Hills. The basic aim of the enemy was to interdict the road to Kargil and thus the capture of these features was very important for the Indian Army.  13 JAK Rif was tasked to commence the build up at Tololing by 13 June 1999 and relieve 2 Raj Rif and in the next phase capture Point 5140 in conjunction with 18 Garhwal Rifles battalion.

However on 15 June 1999, Maj Jasrotia’s  unit location came under heavy artillery shelling from the enemy troops. The first shell resulted in injuries to six soldiers. This sent a wave of shock and panic across the unit and his troops desperately ran for cover. He realized that gravity of the situation and decided to take control of the situation. He ordered his men to take cover within the area of the administrative base and took it upon himself to rescue the injured troops. He moved on despite heavy artillery shelling and tended to the wounded soldiers and arranged for their evacuation to safety. He organized troops into groups and arranged for quick evacuation of the injured soldiers by carrying them on their backs. During this process a shell landed in the close vicinity of Maj Jasrotia and he was seriously injured.

However, despite his injuries he continued the evacuation of his injured troops. He was losing a lot of blood and his condition worsened, but he refused to leave the battleground and consequently life slowly ebbed out of him. He moved six causalities to safety before he collapsed owing to his injuries. Later he succumbed to his injuries and was martyred. Maj Jasrotia’s efforts saved the lives of six soldiers who survived and lived on. Maj Jasrotia displayed exceptional courage, leadership and camaraderie during the operation and made the supreme sacrifice in the service of the nation.

Maj Ajay Singh Jasrotia was a gallant soldier and a fine officer who led his men from the front like a true military leader. He was given the gallantry award, “Sena Medal” posthumously for his valour, devotion to duty, fighting spirit and supreme sacrifice.