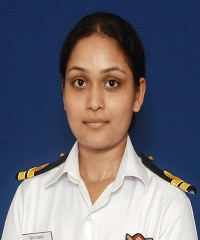 Lt Kiran Shekhawat was born on 01 May 1988 in Mumbai into a Naval family. Daughter of Hon Lt Vijendra Singh Shekhawat and Smt Madhu Chauhan, Lt Kiran Shekhawat belonged to Sefarguwar village in Khetri Tehsil of Jhunjhunu district in Rajasthan. She completed her schooling from Kendriya Vidyalaya-II in Vishakhapatnam and then graduated with a Bachelor of Science from Andhra University. She then worked with a private bank before joining the Indian Naval Academy (INA) in Ezhimala, Kerala in 2010. She then joined the ‘Observer School’ in Jan 2011 and got her coveted ‘wings’ in Feb 2012. After earning her wings, she joined INAS 311 “Kites” as her first assignment and worked as a mission controller.
In Feb 2013, Lt Kiran Shekhawat got married to a fellow naval officer Lt Vivek Singh Chhoker from Kurthala near Gurgaon, where her mother-in-law Sunita Chhoker was a sarpanch and the family had some agricultural land. After a fruitful tenure at INS Dega, she then joined the Indian Naval Air Squadron (INAS) 310 — a premier IW squadron nicknamed Cobras. In her five-year career, she was posted across various Naval stations and was transferred to Goa in 2015. Being an expert on intelligence warfare, she was recording the environment charts and various other parameters required for intelligence analysis during the ill-fated training sortie.
Lt Kiran Shekhawat’s life was all about the Navy — her death too. She was born to a Navy sailor and joined the Navy herself. She was extremely focused and a disciplined officer. Lt Shekhawat had a passion for flying and when she wasn’t on duty, she loved dancing and listening to the tracks of Enrique Iglesias and Shania Twain. A big fan of author Nicholas Sparks, she made sure she either read all his books or watched the movies based on them. Lt Shekhawat, an Observer, had taken part in the first all-women marching contingent of the Navy during the Republic Day parade of Jan 2015. Lieutenant Shekhawat’s father retired from the Navy as Hony Lt and is now running a charitable organization called, “Lt Kiran Shekhawat Foundation” in her honour.

The Indian Navy Dornier that crashed during a night sortie on 24th March 2015 was being flown by a competent and experienced team comprising Lt Kiran Shekhawat, co-pilot Lt Abhinav Nagori and Commander Nikhil Joshi. Lt Kiran was operating in a combat role as an observer in the tactical sorties flown over the ocean for tracking and engaging hostile ships violating the country’s maritime boundaries. Her body and that of the co-pilot Lt Abhinav Nagori were recovered two days after the crash, while the pilot Commander Nikhil Joshi was rescued by a fisherman. The wreckage of the Dornier was found about 60 m under the sea at the south-west of Goa coast. The body of Lieutenant Shekhawat was found inside the fuselage of the aircraft. Lt Kiran Shekhawat was a brave and a committed soldier who became the first Naval woman officer to die in harness. Lt Kiran Shekhawat will always be remembered for her service to the nation and her story will continue to inspire future generations of India.

A tribute by her father Hony Lt Vijender Singh Shekhawat on the 4th anniversary of her martyrdom:

It has been four years since my daughter, Kiran attained martyrdom, but she still shines in our lives, true to her name “Kiran” meaning “Sunray” and illuminates our home. A lovable child right from her childhood, Kiran was liked by one and all in the neighborhood. On the outward, she had a very cheerful disposition but also had resoluteness and toughness of a soldier from inside. Her soldierly qualities came to the fore in the later part of her life.

As a daughter’s father, I treated her with kid gloves initially but my perception about her began to change after she cleared the Service Selection Board (SSB) and got selected to join the Indian Navy. During her initial training, I was worried about her tough training schedule and wondered how she would cope with it. But when she returned from her training and I was looking for a porter on the railway station to carry her luggage, she was all ready in no time with four bags and said, “Chalo” without waiting for any help. Her confidence coupled with the disarming smile filled me with pride and happiness.

During her first posting, I happened to meet her Commanding Officer, who was all praise for her and told me, “Your daughter is professionally very competent and stands well above her contemporaries”. My eyes welled up with tears of delight and I thanked God for blessing me with a daughter like Kiran. I realized that day that she was cut out for bigger things in life.

However, destiny had something else in store for her and she was martyred in an air crash on 24th Mar 2015 and became the first woman officer of Indian Navy to die in harness. The air crash besides Lt Kiran Shekhawat also claimed the life of Lt Abhinav Nagori. I salute and pay my respect to Lt Abhinav Nagori too, for his supreme sacrifice in the service of the nation. My daughter, Kiran showed how a daughter could be an epitome of courage and be a soldier that the nation could be proud of. The takeaway from Kiran’s story—the parents should never underestimate the capabilities of their daughters, as given the right exposure and support they could become shining stars and pride of the nation like “Kiran”.