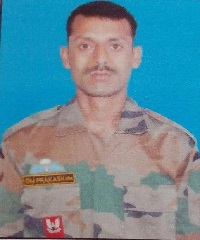 Lance Naik Om Prakash son of Nek Ram was born in Chikhal, in Himachal Pradesh on 02 May 1983. L/ Nk Om Prakash had passed Class X from High School, Juger, and joined the Army in 2003.

L/Nk Om Prakash had joined the 5 J&K Rifles, and become a part of the 9 Para (Commando) battalion after undergoing para commando course. Lance Naik Om Prakash of 9 Para was martyred while fighting terrorists in the EDI building in the Pampore area of the Pulwama district in Kashmir Valley in Feb 2016.

Lance Naik Om Prakash displayed exemplary camaraderie and unparalleled resilience while killing a terrorist by drawing fire onto himself. He was awarded shaurya chakra posthumously in August 2016.

He is survived by wife Krishana Devi and two daughters, Simran and Muskan.