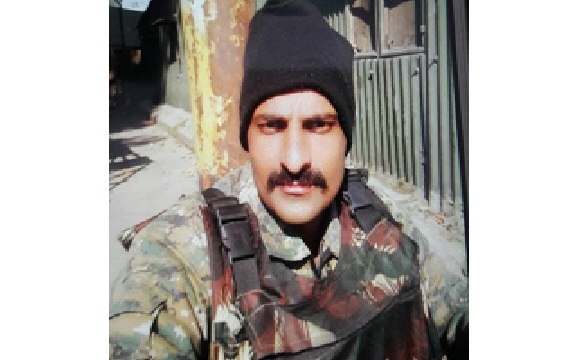 Lance Dafedar Deepak Kumar hailed from Juddi village in Kosli tehsil of Rewari district in Haryana. Son of Late Shri Krishna Kumar and Smt Raj Devi, LD Deepak Kumar was inclined to join the Armed Forces since his younger days. Born in the year 1984 LD Deepak Kumar joined the Army after completing his schooling in the year 2005 at the age of 21 years. He was recruited into the Armoured Corps, the combat arm of Indian Army well known for its battle tanks and other heavy weapons.
After serving for a couple of years, LD Deepak Kumar got married to Ms Pinky and the couple had a son Alok. By 2021, he had completed over 15 years of service and had taken part in various field operations. After serving with his parent unit LD Deepak Kumar, was later deputed to serve with 24 RR battalion, deployed in J&K for counter insurgency operations.

During Jan 2021, LD Deepak Kumar’s unit was deployed in Kulgam district of J & K and was engaged in operations against the terrorists on a regular basis. The AOR(Area of Operations) of the unit fell into the region affected with active militancy which demanded 'high alert' at all times on the part of the troops. The battalion followed strict SOPs(Standard Operating Procedures) while moving its men  and material by deploying road opening teams to conduct sanitization of the area. LD Deepak Kumar was part of one such road opening team on 27 Jan 2021 along the Srinagar-Jammu highway.

LD Deepak Kumar and his comrades were part of road opening team deployed along the Shamshipora stretch of Srinagar-Jammu highway. As LD Deepak Kumar and his team were engaged in the sanitization exercise, the terrorists detonated an IED(Improvised Explosive Device) planted in an abandoned building with in the campus of a government middle school in Subhanpora frequented by the 24 RR battalion.  The IED blast caused an explosion unleashing a spray of splinters that struck LD Deepak Kumar and three other soldiers. The soldiers were rushed for the medical treatment to 92 Base Hospital at Srinagar. However LD Deepak Kumar later succumbed to his injuries and was martyred.

LD Deepak Kumar was a brave and dedicated soldier who made the supreme sacrifice in the service of the nation. LD Deepak Kumar is survived by his mother Smt Raj Devi, wife Smt Pinky Kumar and son Alok.