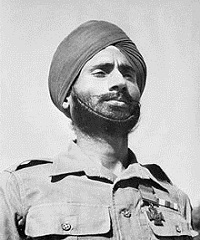 During March 1944, in Burma the Japanese held a position called India Hill, which had a very steep knife-edged ridge. Acting Naik Nand Singh and his platoon were ordered to capture this position. As Acting Naik Nand Singh and his men approached, they were met with heavy machine gun and rifle fire which killed or injured most of them. Acting Naik Nand Singh moved forward alone, even though he was injured. He then captured the first trench and killed the two Japanese occupants with his bayonet. Following this he moved onto the second and third trenches, again sustaining injuries from the continuous heavy fire and grenades of the Japanese. Again he silenced them with his bayonet – single-handedly. Acting Naik Nand Singh was wounded six times but showed incredible bravery, determination, and even total disregard for his own life or safety. He was honoured with Britain’s highest honour – the Victoria Cross.

During December 1947, Jemadar Nand Singh’s unit, 1 Sikh was deployed in Jammu & Kashmir, and his unit was the first to be involved in the J & K Operations or Indo-Pakistani War of 1947 which began in October 1947 as Indian troops went into action to repel a planned invasion of J&K by armed tribesmen from Pakistan.

On 12th Dec 1947, at Uri, the Sikh regiment was out on a fighting patrol against the tribesmen in Kashmir State. The enemy, who was occupying previously prepared bunker position, opened fire on the leading company of the battalion killing 10 men on the spot and wounding another 15. These 15 wounded soldiers were lying within 10 yards of an enemy position. The enemy was attempting, under very heavy covering fire, to pull in these casualties and capture their arms and was at the same time carrying out an encircling movement round this position. At this juncture D company was ordered to attack from the left flank and Jemadar Nand Singh was commanding one of its forward platoons.

Jemadar Nand Singh charged at the enemy with incredible determination and ferocity. He pressed on with hand-to-hand combat and was the first to draw blood with his bayonet. Although wounded, he killed five of the enemy soldiers. Inspired by his raw courage his comrades fought with double vigour and created panic among the enemy soldiers. The enemy broke and fled and thus the objective was achieved. However as Jemadar Nand Singh was standing on top of a bunker, a burst of enemy LMG hit him in the chest, wounding him grievously. He succumbed to his injuries and was martyred leaving behind a tale of unparalleled courage and sacrifice.

On 12 December 1947, 1 Sikh was out on a fighting patrol at Uri against the tribesmen in Kashmir State. The enemy, who was occupying previously prepared bunker position, opened fire on the leading company of the battalion killing 10 men on the spot and wounding another 15. These 15 wounded soldiers were lying within 10 yards of the enemy position. The enemy was attempting, under very heavy covering fire, to pull in these casualties and capture their arms and was at the same time carrying out an encircling movement round this position. Counter-attacks by the company on these bunkers had failed, resulting in even heavier casualties. Another company was then ordered to attack from the left flank. Jemadar Nand Singh, VC, was commanding one of its forward platoons.

His platoon went into attack like a band of Trojans with himself to the fore. The fire was intense and his men were falling left and right of him. Yet he pressed on. His men followed him shouting cries of “Sat Sri Akal” and closed in on the enemy. He carried on. Fierce hand-to-hand fighting ensued. Jemadar Nand Singh was the first to draw blood with his bayonet. Although wounded, he killed five of the enemy. By this fine example, his men were inspired to a frenzy and fought like fiends, bayoneting right and left. The enemy broke and fled, but very few of them could escape.

This brave VCO had captured his objective, but as he stood there on top of the bunker, a burst of enemy LMG hit him in the chest and killed him on the spot. However, his mission had been completed. The valour, leadership and selfless devotion to duty displayed by this son of India in this little action was something that cannot be described, much less matched. He was VC of the last war and had more than lived up to the reputation of one.

The KING has been graciously pleased to approve the award of the VICTORIA CROSS to: —

No. 13068 Sepoy (acting Naik) Nand Singh, 11th Sikh Regiment, Indian Army. In Burma on the night of the 11th/12th March 1944, a Japanese platoon about 40 strong with Medium and Light Machine-Guns and a Grenade Discharger infiltrated into the Battalion position covering the main Maungdaw-Buthidaung road and occupied a dominating position where they dug foxholes and underground trenches on the precipitous sides of the hill.

Naik Nand Singh commanded the leading section of the platoon which was ordered to recapture the position at all costs. He led his section up a very steep knife-edged ridge under heavy machine-gun and rifle fire. Although wounded in the thigh he rushed ahead of his section and took the first enemy trench with the bayonet by himself. He then crawled forward alone under heavy fire and though wounded again in the face and shoulder by a grenade which burst one yard in front of him, took the second trench at the point of the bayonet.

A short time later when all his section had been either killed or wounded, Naik Nand Singh dragged himself out of the trench and captured a third trench, killing all the occupants with his bayonet. Due to the capture of these three trenches the remainder of the platoon were able to seize the top of the hill and deal with the enemy. Naik Nand Singh personally killed seven of the enemy and owing to his determination, outstanding dash and magnificent courage, the important position was won back from the enemy.