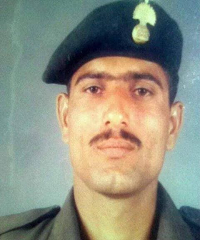 Grenadier Nimba Ram Dudi hailed from Salwa Kallan village in Jodhpur district of Rajasthan and was born on 1st Jul 1980.  Son of Shri Gordhan Ram Dudi and Smt Pemi Devi, Gdr Nimba Ram joined the Indian Army on 13 Nov 1999 at the age of 19 years.  He was recruited into 8 Grenadiers of the Grenadiers Regiment, an Infantry regiment with a rich history of gallantry and battle honours.

During 2001, Gdr Nimba Ram Dudi’s unit was deployed in Kupwara district of  J&K. The unit received information from the intelligence sources about the presence of some hardcore terrorists in its area of responsibility. Based on the information received the unit planned a search and destroy operation on the night of 4th Jul 2001. Gdr Nimba Ram who was part of the QRT (quick reaction team) of the unit was included in the  team that was assigned the task of undertaking this operation.

Gdr Nimba Ram along with his team reached the suspected area and quickly launched the search and cordon operation. Soon thereafter the terrorists attacked the troops with automatic weapons. Raising to the occasion, Gdr Nimba Ram showing outstanding courage,  led the charge to draw the terrorists out of their hiding. As he threw hand grenades at close quarters, he was wounded by a bullet but continued to engage the terrorists. Meanwhile, the radio operator in the assault team was targeted by the terrorists and he fell to the ground, shot on his legs. Gdr Nimba Ram crawled up to the injured soldier and tried to move him  to safety. while doing so Gdr Nimba Ram got hit by 3 bullets in his neck and head. He got grievously and latter succumbed to his injuries.

Gdr Nimba Ram was a gallant soldier who displayed commendable bravery, determination, fighting spirit, devotion to duty and laid down his life in the service of the nation. He was given the gallantry award, “Sena Medal” for his outstanding courage and supreme sacrifice.