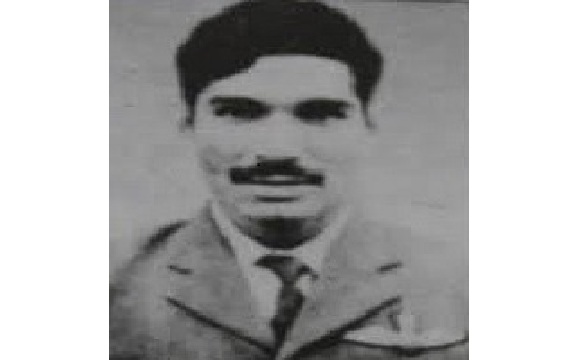 Place of birth : Ghaziabad (UP)

Fg Offr Sudhir Tyagi hailed from Jhadina village of Ghaziabad district in Uttar Pradesh and was born on February 12 1946. He was commissioned into the Indian Air Force on 04 June 1967 at the age of 21 years. He joined the flying stream of the IAF and got trained as a fighter pilot as part of 97th Pilots' course. By 1971, he had put in around 4 years of service and evolved into a professionally competent fighter pilot having expertise in various air operations.

During 1971, Fg Offr Sudhir Tyagi was serving with 27 Sqn, known as "Flaming Arrows". The Squadron was formed at Adampur on 15 Feb 1957 with the de Havilland Vampires, but was later armed with the Hawker Hunter MK56 aircrafts. The squadron took part in "Operation Vijay" for the liberation of Goa in 1960 and also took part in the1965 war with Pakistan. After the war, the Hunter MK 56A replaced the Hunter MK56 in the Squadron. In 1971, the 27 Squadron operating from Halwara changed it’s role to deep penetration strike and was shifted from Halwara to Pathankot. As war broke out with Pakistan on the 3rd of December, 1971, the Squadron with Wing Commander Mian Naranjan Singh as its commanding officer was tasked for various offensive air missions. Fg Offr Sudhir Tyagi was detailed to carry out one such strike mission on 04 Dec 1971.

On 4 December 1971, Fg Offr Sudhir Tyagi in his Hunter (A-490) took off as planned for the mission from Pathankot. He was No.2 in a two-aircraft strike mission over Murid airfield. When attacking the enemy airfield, Fg Offr Sudhir Tyagi spotted an enemy aircraft close on the tail of the leader of the mission. He engaged the aircraft and shot it down. An enemy Mirage and two Sabres closed in on him. In the ensuing battle, in spite of being outnumbered, he fought valiantly though his aircraft was shot down. The name of Fg Offr Sudhir Tyagi, was reportedly announced over Pakistan Radio on 05 Dec 1971 as having been captured. He is presumed to have been taken over as a POW (Prisoner of War). However, successive regimes in Pakistan have denied the existence of Indian POWs in its jails. Presently, Fg Offr Sudhir Tyagi's name features on the official list of the ’54 Personnel Missing in Action’, tabled in the Lok Sabha in 1979 by the then Minister of State of External Affairs Shri Samarendra Kundu. Fg Offr Sudhir Tyagi's mother Smt Shobha Tyagi and uncle Shri Narendra Kaushik have taken up the matter with various Indian Government authorities a number of times for his release from Pakistani jail.

On 4 December 1971, Flying Officer Sudhir Tyagi was No.2 in a two-aircraft strike mission over Murid airfield. When attacking the enemy airfield, he spotted an enemy aircraft close on the tail of the leader of the mission. He engaged the aircraft and shot it down. An enemy Mirage and two Sabres closed in on him. In the ensuing battle, in spite of being outnumbered, he fought valiantly though his aircraft was shot down. Throughout this operation, Flying Officer Tyagi displayed gallantry, professional skill and devotion to duty of a high order.