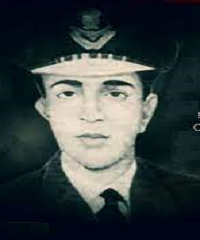 Flying Officer Prem Ramsingh Ramchandani hailed from Mumbai in Maharashtra and was born on 21 Oct 1941. He was commissioned into the Indian Air Force on 22 June 1963 at the age of 22 years. He joined the flying stream of the IAF and got trained as a fighter pilot as part of 84th Pilots' course. By 1965, he had put in barely 2 years of service when the war with Pakistan broke out and he got involved in active operations very early in his service career.

During 1965, Fg Offr Ramchandani was serving with No 3 Squadron  known as “Cobras” and was based at Air Force Station Pathankot. No.3 Squadron was initially raised at Peshawar on 1st October 1941, nearly six months after the raising of No.2 Squadron under the command of Squadron Leader NAN Bray. In 1965, the Squadron was operating Mystere IVa aircraft under the command of Wing Commander Paul Cecil Roby. In 1965, as fighting flared up in the Chhamb sector on 01 Sep, the squadron was called upon to carry out its first offensive sorties on 01 Sep itself, when numerous sorties were flown against 'Targets of Opportunity' in support of the Indian army's offensive across the International border. On the evening of 1 September, No. 3, along with Squadron No. 31, flew 16 sorties in 45 minutes against Pakistani Armour at Chhamb.

A change of command occurred midway, as Wg Cdr S Bhattacharya took over from Paul Robey, who had fallen sick. No. 3 Sqn continued interdiction and close air support (CAS) missions throughout the war. The unit successfully flew in interdiction against Pakistani Armour in the Chawinda area too, destroying a sizeable enemy concentration on 19 September. Fg Offr Ramchandani was part of many missions and played a crucial role in meeting the war time objectives of the Squadron.

Fg Offr Ramchandani  was tasked for another mission on 22 Sept with Flt Lt Doraiswami as the leader who was flying his 21st Operational Mission. However the targets Fg Offr Ramchandani and his comrades had been assigned had changed hands in the swiftly moving battles.  As a result the Mysteres ended up attacking Pakistani positions that were held by our own troops. When the Indian forces returned fire, Fg Offr Ramchandani's Mystere got hit and caught fire. As the aircraft got engulfed in fire, he ejected safely but was fired upon while descending by parachute. He sustained injuries and was evacuated to the nearby military hospital.  However he succumbed to his injuries and was martyred on 26th September 1965. Fg Offr PR Ramchandani was a gallant air warrior and a committed soldier who laid down his life in the service of the nation.