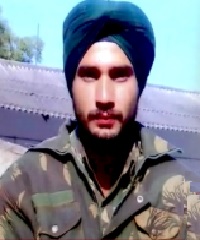 Corporal Gurusewak Singh was a commando in the Indian Air Force and belonged to the Garud commando force, a special force of the IAF. Corporal Singh hailed from Ambala, a cantonment town in Haryana. His father, Sucha Singh too served in the army and his elder brother, Hardeep Singh is also serving in the army. Inspired by Shaheed Bhagat Singh, Corporal Singh always wanted to serve his nation. He completed his BA at a well-known college in Bangalore and soon thereafter, attempted the IAF entrance exam. He cleared it in his very first attempt and joined the Indian Air Force in 2010.

Subsequently he volunteered to join the Garud commando force of the IAF , en elite force trained to tackle challenging situations. On 18th November 2015, he got married to Jaspreet from Haryana.

During 2016, Corporal Gurusewak Singh was serving at Air Force Station Adampur in Punjab. Upon receiving news of the Pathankot attack, the Guard unit was rushed to the airbase to deal with the terrorists. On 3rd January, the Indian Air Force dropped their commandos at various spots to sanitize the area and attack the terrorists from different points. While Corporal Gurusewak Singh was getting down from the helicopter using a rope, he was shot by a terrorist in the neck. Undeterred, he continued with the operation but succumbed to his injuries before medical help could arrive.

Corporal Singh displayed courage and gallantry of a very high order and fought with grit and resolve. He was a committed and valiant air warrior who laid down his life in the service of the nation.