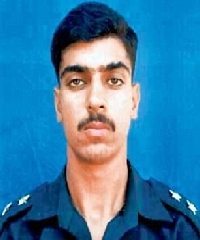 Capt Saurabh Kalia was born on 29 June 1976 at Amritsar, Punjab. Son of Dr. N K Kalia and Mrs. Vijaya, Capt Saurabh had a younger brother, Vaibhav Kalia. He finished his schooling from D.A.V Public School in Palampur and got his bachelor’s degree in medical sciences from H. P. Agricultural University, Palampur, in 1997. Capt Saurabh was excellent in academics during his student days and won various scholarships throughout his academic career.

Capt Saurabh was selected for the Indian Military Academy, in August 1997 through Combined Defense Services and was commissioned on 12 December 1998.  He was commissioned into 4 Jat of the Jat Regiment, an infantry regiment known for its fearless soldiers and numerous battle and theater honours. As his first assignment, Capt Saurabh was posted to J  & K where his unit was deployed in the Kargil sector. He arrived there in January 1999 after reporting at the Jat Regimental Centre, Bareilly on 31 December 1998. He joined the unit as a Lieutenant and was promoted to the rank of Captain on the battlefield at the age of 22 years.

During 1999, Capt Saurabh’s unit was deployed in Kaksar area, just short of Kargil overlooking the National Highway 1D. In the early part of May 1999, unusual movements were noticed in Batalik-Yaldor sector and consequently Indian Army units had commenced aggressive patrolling of the area in their AOR (Area of Responsibility). Similarly in the first two weeks of May 1999, several patrols were conducted in the Kaksar Langpa area of Kargil district, to check for the presence of intruders and also see if the snow had retreated enough for the summer positions to be re-occupied. On 15 May 1999 Capt Saurabh Kalia was tasked to lead a patrol to Bajrang post, which was part of the unit’s defences but was usually vacated during the winter. Capt Saurabh Kalia and five other soldiers – Sepoys Arjun Ram, Bhanwar Lal Bagaria, Bhika Ram, Moola Ram and Naresh Singh set off for the Bajrang post as planned.

After a continuous crossfire with Pakistan armed forces from across the LOC, Capt Saurabh Kalia and his troops ran out of ammunition. They reported this matter to the base camp and called for reinforcements. However, before the troops could arrive, they were surrounded by a platoon of Pakistani rangers and captured alive. The Indian troops found no trace of the patrol party and launched a massive search operation to locate them. Meanwhile, Radio Skardu of Pakistan announced that Capt Saurabh Kalia had been captured by Pakistani troops. This event led to the discovery of hundreds of guerrillas, who had established fortified positions on the peaks of the hills deep inside the Indian side of the Line of control, with sophisticated equipment and supply lines back to Pakistan-controlled Kashmir.

Capt Saurabh Kalia and his men were in captivity from 15 May 1999 – 7 June 1999 for about twenty-two days and subjected to torture as evident from injuries to their bodies when they were handed over by the Pakistani Army on 9 June 1999. The postmortem examination revealed that the Pakistani forces had tortured their prisoners in gross violation of the Geneva Convention on the treatment of prisoners of war.

On 9 June 1999, Dr. N K Kalia received the body of Capt Saurabh Kalia, handed over by the Pakistani army to Indian army commanders at the Kargil sector, with evidence of torture. Capt Saurabh Kalia was a valiant and committed soldier who laid down his life in the service of the nation. Capt Saurabh Kalia is survived by his father Dr Narinder K Kalia, mother Smt Vijaya Kalia and brother Shri Vaibhav Kalia.

According to the Geneva Convention Part 2 Article 13 (General protection of prisoners of war), Prisoners of war must at all times be humanely treated. Any unlawful act or omission by the Detaining Power causing death or seriously endangering the health of a prisoner of war in its custody is prohibited, and will be regarded as a serious breach of the present Convention.

In particular, no prisoner of war may be subjected to physical mutilation or to medical or scientific experiments of any kind which are not justified by the medical, dental or hospital treatment of the prisoner concerned and carried out in his interest. Likewise, prisoners of war must at all times be protected, particularly against acts of violence or intimidation and against insults and public curiosity. Captain Saurabh Kalia, Sepoys Arjunram Baswana, Mula Ram Bidiasar, Naresh Singh Sinsinwar, Bhanwar Lal Bagaria and Bhika Ram Mudh were captured by Pakistani troops during a reconnaissance patrol in the treacherous mountainous terrain in May 1999, brutally tortured and killed.

In gross violation of the Geneva Convention the Pakistani Army subjected Captain Kalia and his soldiers to horrendous torture during which the soldiers’ ear drums were pierced with hot iron rods, eyes punctured and genitals cut off. The autopsy of the bodies also revealed that they were burned with cigarettes butts. Their limbs were also chopped off, teeth broken and skull fractured during the torture. Even their nose and lips were cut off.

The body of Capt. kalia was sent to his family on June 9, 1999. Saurabh Kalia’s brother, Vaibhav, identified his body when it arrived in a coffin wrapped in the national flag. He recalled “Saurabh’s face was the size of my fingers, his eyebrows were the only visible feature, no eyes, no jaw, there were cigarette burns… it was very bad. My parents couldn’t have seen him.” His family seeks justice for the gruesome torture that Capt. Kalia had to undergo.

On 15 June 1999 the Deputy High Commissioner of the Pakistani Embassy in New Delhi was summoned, and a notice of breach of the Geneva Convention was submitted for the torture and killing of the prisoners of war during the Kargil War. The Minister of External Affairs Jaswant Singh raised the issue with Sartaj Aziz, the Foreign Minister of Pakistan for the identification and punishment of the guilty, but Pakistan continued to deny the charges of torture. On 14 December 2012 Pakistan’s Interior Minister Rehman Malik expressed that Capt Saurabh Kalia may have died because of weather conditions.

Capt Saurabh Kalia’s family is continuing efforts to get justice from the government, and to highlight the war crimes that were committed against their son Capt Saurabh and other Indian soldiers. Dr N K Kalia, his father has been following his son’s case and wants the act to be declared a war crime by the UN, and the people responsible for the war crimes punished as per the rulings of the Geneva Convention. He also started an online signature campaign to highlight the plight of the war victims.

Capt Saurabh Kalia’s father has approached various national and international organisations to put pressure on Pakistan to identify, book and punish the persons responsible for the crime. Dr N.K. Kalia’s petition was pursued by Mr Rajeev Chandrasekhar, (ex- MP) who wrote to the External Affairs Minister and raised questions in Parliament on why the Government had not taken up the case of Capt Saurabh Kalia with the UNHRC, to declare this act a war crime, identify, and punish all the perpetrators. In response to a question raised by Mr Chandrasekhar, the then Defence Minister A. K. Antony wrote to Capt. Kalia’s parents in October 2013 that India was bound by the Simla Agreement, and any differences with Pakistan would be settled bilaterally.

Former Indian Army Chief General Bikram Singh also supported the efforts of Capt Saurabh Kalia’s father along with Mr Rajeev Chandrasekhar, and the Flags of Honour Foundation, filed a petition with the United Nations Human Rights Council (UNHRC) on 7 December 2012, with Juan E. Méndez, Special Rapporteur on Torture, of the Office of High Commissioner of Human Rights in Geneva. But the UNHRC is an inter-state body and usually acts only in terms of initiatives taken by its member states.

The Supreme Court took up public interest litigation (PIL) in September 2014, filed by Dr N. K. Kalia and Sarwa Mitter, and asked the Centre to file an affidavit within six weeks. The affidavit challenged the petition saying a PIL could not seek action against a foreign country, and that foreign policy was a government function. The current government feels that moving the International Court of Justice against Pakistan in the matter is not practical. The fact remains that the justice is still being denied to Kalia family but they have resolved to continue their fight for justice.