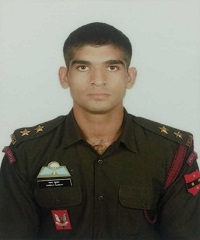 Capt Pawan Kumar was born on January 15, 1993 and hailed from Badhana village in Jind district of Haryana. The only son of Shri Rajbir Singh and Smt Kamlesh, Capt Pawan Kumar was born on the Indian Army Day (15 Jan). He nursed the idea of joining the Armed Forces since his younger days. He continued to pursued his dream and eventually and got selected to join the prestigious NDA after his schooling. He graduated from the 123 course of the National Defence Academy and joined the Army on December 14, 2013. He got commissioned into 7 Dogra of the Dogra Regiment, an infantry Regiment known for its gallant soldiers and numerous battle exploits.

Capt Pawan Kumar was a die hard soldier and loved adventurous life. Consequently, he volunteered to join the elite special forces and got trained as a para commando. In June 2015, he eventually joined 10 Para(SF) battalion, the elite force known as “Desert Scorpions” as officers and jawans of this unit were trained specially for desert warfare. Donning maroon beret and “Balidan” badge, Capt Pawan Kumar was proud to be part of the force that had men of steel, whose physical and mental toughness was beyond compare.

During 2016, Capt Pawan Kumar was serving with 10 Par (SF) deployed in J& K for counter insurgency operations. On 20 February 2016, 4 Lashkar-e-Taiba terrorists armed with AK-47 Assault rifles, hand grenades and explosives attacked a CRPF convoy on the main road linking Srinagar to Jammu, killing two policemen and a civilian. The militants then took refuge in the government-run multi-storey “Entrepreneurship Development Institute” in Pampore. The security forces with elements of Army and Central Reserve Police Force rose to the occasion and cordoned off the building in a joint operation to evacuate civilians from the building.

The main objective of the security forces was to evacuate civilians to safety. However the militants responded with automatic gunfire and hand grenades. A fierce gun battle ensued thereafter with heavy exchange of fire from both sides. Leading from the front, Capt Pawan reached the top floor, firing on the door and the window of the room in which the militants were holed up. As he kicked the door to lob a hand grenade inside, a hidden terrorist shot him from close range. Undeterred by his grievous injuries and refusing evacuation, Capt Pawan kept firing at the terrorist and killed him. He also killed another terrorist who was aiming to fire at his men. This gallant action by Capt Pawan Kumar saved the lives of his comrades and set the stage for the elimination of remaining terrorists. He later succumbed to his injuries and was martyred, but his gallant action paved the way for the security forces to complete the operation successful. Capt Pawan Kumar was a committed soldier and a brave officer who laid down his life at the age of 23 years in the service of the nation. Capt Pawan Kumar was given the gallantry award, “Shaurya Chakra”  on 15th Aug 2016 for his exceptional courage, fighting spirit and supreme sacrifice.

(Some want reservation and some want independence. I do not want anything, except my blanket.)