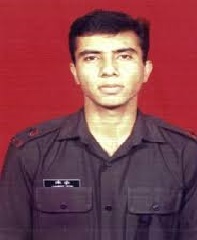 Captain Haneef Uddin hailed from Delhi and was born on 23 August 1974. He had lost his father when he was eight years old and had two brothers Nafees and Sameer. His mother Hema Aziz is a classical singer who worked for Sangeet Natak Academy and Kathak Kendra in Delhi. Capt Haneef was a science graduate from Shivaji college, Delhi. Besides being a trained computer expert, Capt Haneef was a talented singer and an extremely popular figure in his college. He was crowned as ‘Mr. Shivaji’ in his college, which further added to his popularity during his student days.

Capt Haneef was extremely disciplined, responsible and ambitious and always had the desire to join the army. This made him give up on other lucrative alternatives and join the Indian Military Academy after his graduation in 1996. Getting into the army was not easy for Capt Haneef as he did not have any guidance from his family or friends as none of them had gone on this path before. With sheer determination and dedication, he not only cleared the exam but gained expertise in the different aspects of the training. His mother was overwhelmed to see Haneef grow into a responsible and mature individual. He was commissioned into the Army Service Corps, the logistic arm of Indian Army on June 7, 1997. As his first assignment, he was posted to 11 Raj Rif an infantry battalion for his field experience. He was posted in the Siachen region prior to Kargil and his battalion was later deployed in Turtuk in Ladakh during the Kargil war.

Captain Haneef was a very jovial person and a very popular figure among his troops. He would use his singing prowess to lighten the mood in his camp. He would always carry his music system with him and would keep his mind relaxed with music, to stay focused for the unforeseen circumstances. He would often sing songs for his troops to keep them relaxed and motivated. This was a welcome respite for his troops who were stationed in treacherous conditions under extreme climatic conditions, away from civilization with the threat of war looming large upon them. This made captain Haneef popular among his men and a very likable person.

It was very early days of Kargil war when there was very less information available about the enemy troops. A company of 11 Raj Rif was deployed in Operation Thunderbolt on June 6th, 1999 at an altitude of 18,000 feet in the Turtuk region. Their mission was to capture a position in the region which would facilitate the army to monitor the movements of the enemy troops better. The capture of this position would give the troops a strategic advantage in those early stages of the war. Captain Haneef volunteered for this operation as it was his nature to lead from the front. He set off for the operation with one junior commissioned officer and three other ranks. They made significant strides on the nights of 4th and 5th June and captured nearby positions. They captured the adjacent position and set out their advance on 6th June to capture the position they desired. They were undeterred by an altitude of 18,500 feet and extreme temperatures. They were however spotted by the enemy and fired upon. A firefight followed, against an enemy equipped with heavy artillery.

Captain Haneef was looking over the safety of his men more than himself. He took up a position and showered bullets on the enemy. In the exchange of bullets, he was badly injured. But he kept engaging the enemy until his men were safe from the enemy fire. He ran out of ammunition and was shot from all directions. He succumbed to his injuries, just 200 meters from the position they set out to capture. He displayed extreme valor in the face of the enemy and was more concerned about his team’s safety more than his own. He attained martyrdom at the tender age of 25, exactly two years after he was commissioned in the army. His body could not be recovered till the end of the war from the Turtuk region due to the presence of the enemy and treacherous temperature conditions and terrain. “As a soldier Capt Haneef served his country with pride and dedication. “There cannot be a greater statement on his valor than his death which came while fighting the enemy” said his proud mother after learning about the death of her son.

“Ek pal mein hai sach saari zindagi ka; Iss pal mein jee lo yaaron, yahan kal hai kisne dekha (The truth of our lives is encapsulated in one moment; Live this moment, who knows what tomorrow holds). These lyrics were written by his younger brother Sameer and Captain Haneef would often sing this song for his troops in the camp. He completely lived by the spirit of this song.

On 06 June 1999, a company was deployed in “Operation Thunderbolt” to occupy a position, occupation of which would have facilitated better observation spectrum of enemy movement and dispositions in the area. Captain Haneef Uddin volunteered to lead the special mission patrol consisting of one junior commissioned officer and three other ranks. The party made valiant endeavours to occupy the position on the night of 4th and 5th June 1999. On 06 June 1999 the party tried approaching the position from an adjacent position occupied the previous night by Captain Haneef Uddin at height of 18,500 feet. Advancing in sub-zero temperature along the razor sharp edge from the southwesterly direction, the party came as close as 200 metres of the position when it was fired upon. Captain Haneef Uddin and two other ranks received the brunt of fire.

If you find any information that is incorrect or inappropriate or have additional information about the soldier that can be added to his page please contact us by using the tab given below.