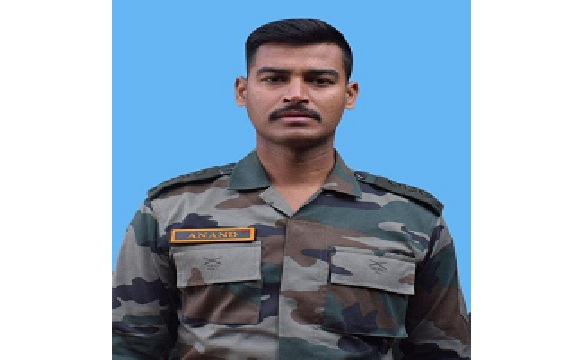 Captain Anand Kumar hailed from the Nayagaon Shiromani Tola village of Khagaria district in Bihar. Son of Shri Madhukar Sangahi and Smt Mamta, he had a brother as his sibling. He did his initial schooling from Sarsawati Vidya Mandir in Bhagalpur district, where his father was serving in Police department. Later he completed his class XII from Chinmay Inter School, Bokaro in the year 2014. Capt Anand had developed a keen interest in Armed Forces since his younger days. Consequently following his inclination, he got selected to join the prestigious NDA after completing his schooling in the year 2015.

Later he went to IMA Dehradun for further training and passed out on 07 Dec 2019. He was commissioned as a Lieutenant into 15 Raj Rif battalion of the Rajputana Rifles Regiment, an infantry Regiment known for its brave soldiers and numerous battle honours.

During 2022, Capt Anand Kumar’s unit 15 Raj Rif  was deployed in Mendhar sector of Poonch district in Jammu and Kashmir. The unit was manning the forward posts along the LOC in Poonch district. As the area of his unit’s operation was very volatile and prone to infiltration by militants, the unit had to maintain a strict vigil at all times and deployed armed patrols with regular frequency. The landmines along the patrol routes posed a serious danger to the troops and the Bomb Disposal Squad of the unit was often called upon to sanitize the routes. On 17 July 2022, Capt Anand Kumar was tasked to lead one area domination patrol in the unit's AOR.

As Capt Anand Kumar and his comrades were traversing through the challenging terrain as per the planned patrol route, there was a massive mine blast. The blast had a devastating effect, injuring Capt Anand Kumar, Nb Sub Bhagwan Singh  and many of their comrades. The injured soldiers were immediately air lifted to Military Hospital Udhampur for medical treatment.  However Capt Anand Kumar and his Junior Commissioned Officer, Nb Sub Bhagwan Singh  later succumbed to their injuries and were martyred. Capt Anand Kumar was slated to get married soon but he was more devoted to the higher cause of serving the motherland and laid down his life in the service of the nation at the age of 26 years.