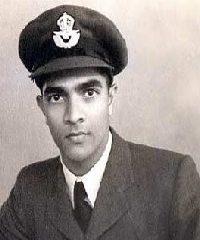 Vonthibettu Prabhakara Hegde was born on 24 August 1925. He was commissioned in the Indian Airforce on 24 February 1945, a few months before the end of the second world war. As a pilot and flying officer, he flew Hurricanes, Spitfires, and Mosquitos. He also flew transports and bombers including the Lancaster and the B-24 Liberator resurrected for IAF by HAL. He finished his glittering career with an experience of flying 23 different aircraft. He was particularly known for his highly skilled handling of the DC-3 Dakota. His stall turns of the DC-3 Dakota was a display of extreme skill and courage. As a flight lieutenant, he was called up for action in the Kashmir war of 1947.

He provided transport support for Poonch, Mendhar, Uri, Tithwal, Kargil, Drass and Leh. He was piloting some of the most arduous and difficult flights. He was carrying out operations in the most treacherous weather conditions and some of the most difficult airstrips. He displayed extreme courage while taking up the operations near the border, fully aware of the dangers. His aircraft was repeatedly hit and damaged at Tithwal and at Uri, which did not deter him. He was once in a very dangerous situation while flying near the border. He was flying a Dakota DC-3 down the Banihal Pass near the Peer Panjal pass. They were told that it was a safe zone but they realized that it was a miscalculation as their aircraft came under intense machine gun fire from the enemy side. He skillfully maneuvered his aircraft and escaped the scene with just six bullet hits. He later recalled that one bullet was fired right under his seat and that it was a narrow escape. He won many accolades for his work in the Kashmir operations of 1947 and had made a name for himself as a very skillful and accomplished officer.

Another crowning moment in his career came when he was chosen by former prime minister Pandit Jawaharlal Nehru to fly him to the Mangalore Airstrip for his election campaign. Mangalore Airstrip, formerly known as Bajpe Aerodrome was still under construction at the time and had a makeshift runway. It had a Tabletop runway akin to the ones at Kashmir. He recalled that they were digging up the hill and leveling the runway at the time. It did not have a conducive environment and would require a very skillful and experienced pilot to safely land on such a runway.  On 25 December 1951, he flew his Dakota DC-3 to Bajpe aerodrome with the prime minister, Pandit Jawaharlal Nehru aboard. He skilfully landed his aircraft on the 1800 feet airstrip, much to the praise of the prime minister and onlookers. This was incidentally the first ever landing in the now Mangalore International airport. He was praised by the everyone for this but he remained modest and said that any experienced pilot could have done the same.

In 1963, he was in the ‘Twin Pioneer’ aircraft along with a Scottish test pilot at Jorhat airstrip in Assam. The engine was switched off to test its maneuverability. But the plane couldn’t gain height and hit a hillock and exploded, claiming the lives of three people. He miraculously escaped without injury as he was thrown out of the plane.

Wing Commander Hegde flew for the Indian Air Force for 24 years and retired in 1968. He was awarded the Vir Chakra, India’s third-highest gallantry award, for outstanding services rendered as an IAF squadron leader during the Kashmir operations in the Indo-Pakistan War of 1947. He breathed his last on September 7, 2011 in Bangalore.

Lieutenant vonthibettu Prabhakara Hegde put up consistent efforts from the day the Kashmir operations started till the cease-fire. He was in the thick of it right through and at all times showed the greatest determination and perseverance in carrying out the arduous and difficult flights in providing transport support for Poonch, Mendhar, Uri, Tithwal, Kargil, Dras and last, but not least, Leh. Both at Tithwal and Uri, his aircraft was repeatedly hit and damaged. Considering the treacherous nature of the country and the frequent occasions when most of his transport support flights had to be carried out under adverse weather conditions, it required great powers of endurance and skill on the part of the pilot.   In carrying out his duties well, Squadron. Leader Hegde set a fine example for others to follow.