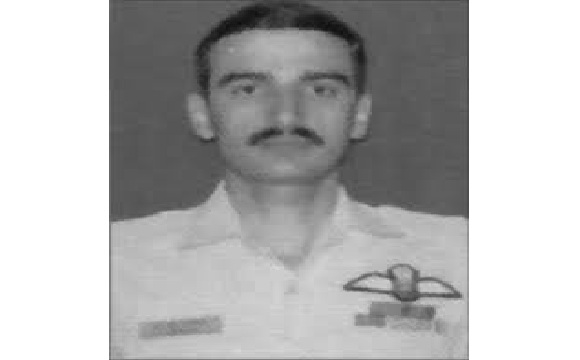 Wg Cdr Rajpal Singh Dhaliwal hailed from Punjab and was born on 06th Jan 1974. He had a strong desire to join the armed forces right from his childhood, which grew along with his age. Following his passion, he got selected for the prestigious NDA after completing his school education. During his NDA tenure he excelled in various aspects of training and got selected for the Indian Air Force. Later he went to the Air Force Academy in Hyderabad and got commissioned as a Pilot Officer on 17 June 1995 as part of 155th Pilots' Course.

Having been inducted into the flying stream of the IAF, he got trained as a fighter pilot. After completing his multi-stage flying training, he joined the operational squadron and thereafter served at various Air Force bases.  While serving with 17 Sqn AF, as a Flying Officer, he became one of the youngest pilots in the history of the IAF to take part in the night strike on enemy positions, during Operation 'Safed Sagar' in July of 1999.  He flew a total of four successful operational missions, over the jagged hills of Kargil at night, in very demanding circumstances. In all these missions, he accurately delivered his weapons and proved his mettle as a gallant and competent air warrior.  He was awarded 'Vayu Sena Medal' for his exceptional courage, determination and devotion to duty during Op 'Safed Sagar'.  After serving for sometime, he got married to Ms Rubina and the couple had a daughter Rasha. By 2009, he had put in about 14 years of service and had evolved into a professionally competent fighter pilot with expertise in various air operations.

During 2009, Wg Cdr Rajpal Singh Dhaliwal was serving with Surya Kiran Aerobatic Team (SKAT). The Surya Kiran Aerobatic Team (SKAT) was formed in 1996 and was a part of the 52nd Squadron of the IAF. He joined the team on 01 July 2007 and took part in various Aerobatics shows. The team served as an ambassador of the Indian Air Force to showcase its prowess and professionalism. The aerobatics team always consisted of very experienced and highly skilled pilots as its role demanded flying skills of a very high level. All members of the SKAT were qualified flying instructors and were among the best fighter pilots in the IAF. These pilots whose main job was to fly highly risky aerobatic formations were selected after a rigorous selection process. It was one of the most coveted jobs in the IAF owing to the accolade, admiration, and respect that SKAT enjoyed in the IAF as well as people at large. Wg Cdr RS Dhaliwal was among the ace pilots who had flown fighter aircraft extensively and joined the famed SKAT. The pilots followed a rigorous training schedule to practice for daredevil aerobatics to achieve the desired level of perfection.

On 21 Jan 2009, as part of the ongoing training, Wg Cdr RS Dhaliwal in his Kiran aircraft took off from the Air Force Base at Bidar in Karnataka at  about 8.30 am along with eight others in a 9 aircraft formation. When the team was doing the 'Barbed Wire Cross' manoeuvre, flying one beneath the other and then scattering, Wg Cdr RS Dhaliwal's plane suddenly developed a technical snag and crashed, engulfing it in flames. The components of the aircraft were scattered around a radius of 2 km. The aircraft was flying 100 feet above the ground and the height was too low for the pilot to bail out. As a result Wg Cdr RS Dhaliwal, who was piloting the aircraft lost his life in this tragic accident. Wg Cdr RS Dhaliwal was a dedicated soldier and a professionally competent air warrior who laid down his life in the line of his duty.

Flying Officer Rajpal Singh Dhaliwal (23535-A) Flying (Pilot) is on the posted strength of a Fighter Squadron with effect from 13 May 96. He is a two aircraft leader with 756 hrs of total flying experience. He was actively involved in the operations conducted during Operation 'SAFED SAGAR' and performed flawlessly. His Squadron was tasked for the night strike role over target area from 27 Jul 99 onwards. The profile of these attacks was such that it required accurate and skilful flying in the valley by night at one km above terrain level. Enemy resistance in the form of anti aircraft artillery and low level quick reaction missiles was also present. With mere 46 hours of night flying, no prior exposure to night strikes and limited Valley flying experience, Flying Officer Dhaliwal flew a total of four successful missions in these demanding circumstances. In all of these missions, he accurately delivered his weapons and was also able to visually sight the impact points. Flying Officer RS Dhaliwal has just about four years of commissioned service that makes him one of the youngest pilots in the history of the Indian Air Force to have taken part in night strike operations.

For his exceptional courage, determination and devotion to duty, the Hon'ble President is pleased to award 'Vayu Sena Medal' to Flying Officer Rajpal Singh Dhaliwal.