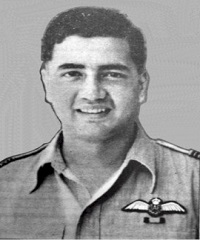 Wing Commander Karun Krishna Majumdar was born in Kolkata on Sep 6, 1913. His maternal grandfather was Womesh Chunder Bonnerjee was the first president of the Indian National Congress. As Wing Commander Karun was over six feet tall and well-built, he acquired the nickname Jumbo. He completed his schooling at St Pauls School in Darjeeling. In 1932, he traveled to England and took admission in Royal Air Force College Cranwell. In 1933, he returned to India as a trained pilot.

In 1942, the Imperial Japanese forces occupied Burma. The No.1 Squadron of the Royal Indian Air Force was posted to Burma, and Wing Commander Karun reached Taungoo with his Squadron on Jan 31, 1942. On the very next day, the Imperial Japanese Army Air Force based in Mae Hong Son in Thailand bombed Taungoo, inflicting considerable damage. However, No1 Squadron, which had taken the wise precaution of dispersing and hiding their Lysanders, remained unharmed. Wg Cdr Karun immediately planned retaliatory action, even though the Westland Lysander was an army co-operation aircraft not meant to serve either as a fighter or as a bomber. Slinging two 250 pound bombs on the stub wing of a Lysander, he set off solo on Feb 2, 1942, towards the Japanese airbase at Mae Hong Son. The New Zealanders of No.67 Squadron of Royal Air Force send two Buffalo aircraft as the escort. Wing Commander Karun took considerable risk in flying low and dropping bombs accurately on target, destroying the enemy hangar, aircraft, and airfield. On the next day, Wing Commander Karun led the entire squadron in a bombing mission and destroyed the aircraft, Wireless installations, and the buildings. Till they were withdrawn from Burma on Mar-Apr 1942, No.1 Squadron played a stellar role supporting the army, for which they were commanded by General Archibald Wavell. On one occasion Wing Commander Karun was forced down in the Shan Jungles due to engine failure and managed to return to Lashio after a harrowing journey through dense forests. Wing Commander Karun was awarded the Distinguished Flying Cross, gazetted in the London Gazette on Nov 10, 1942.

After returning from Burma Wing Commander Majumdar spent the next two years in staff and flying assignments. He was promoted to Wing Commander, the first Indian to reach this rank. Wing Commander Karun volunteered for a posting to No.268 RAF Squadron flying Spitfires during the allied invasion of Europe in 1943. His role in reconnoitering the Falaise-Gap sector and other areas earned him further laurels. His operation tour ended on Sep 20. During this period of 100 days, Wing Cdr Karun flew 65 stories in Mustangs and Hawker Typhoons.  On one occasion he got shot up and force-landed in enemy territory, but was luckily rescued. The Bar to his DFC was gazetted on Jan 23, 1945. Thus he became the most highly decorated Indian Pilot of World War 2.

Wg Cdr Karun Krishna Majumdar was the first war hero in World War 2, A born leader, and a daredevil with a Bar to the DFC. Wing Cdr Karun then participated in the Indian Air Force Display Flight and toured the country conducting aerobatic shows and displays to attract and bring to the public notice. The aerobatic sessions were much demanding on the pilots, which required plenty of practice flying and rehearsal sessions.

On Feb 17, 1945, Wing Cdr Karun decided to do an aerobatic practice sortie in a Hawker Hurricane, the aircraft he chooses had a previous history of snags and problems, and disregarding the advice of his friend and compatriot, Fg Off  Harjinder Singh, he took Hurricane to the skies near Lahore. In the midst of the aerobatic routines which involved a dive, one of the undercarriage legs, unlocked itself from the wheel and deployed down, upsetting the aircraft’s stability. The Hurricane stalled and crashed headlong into the ground, killing Wing Commander Karun Krishna Majumdar instantaneously.