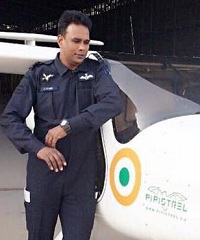 Wing Commander Jaipaul James hailed from Tambaram in Chennai district of Tamil Nadu. Son of Mr. Jaypaul, a retired Indian Air Force Staff, and Mrs. Janet, Wg Cdr James always wanted to become a pilot in the IAF, since his childhood. His dream came true when he was commissioned into the flying branch of the IAF and was selected to be a helicopter pilot.

After completing his training Wg Cdr James started his Air Force journey as a Flying officer and served in various helicopter units during his career. He served in various Air Force bases and evolved into an ace pilot having expertise in undertaking diverse operational missions. He had the experience of flying different types of helicopters available in the IAF  and was a professionally competent pilot capable of handling various operational missions.

During 2017-18, Wg Cdr James was serving in the unit based at Air Force station Jorhat in Assam. On 15 Feb 2018, Wg Cdr J James and Wg Cdr Dushyant Vats based at Air Force station Jorhat were assigned an operational task. The pilots in their Virus SW-80 Microlight aircraft took off from the Air Force Station around 12.30 PM. Both of them were experienced helicopter pilots and had undertaken numerous operational missions in their service career. The assigned task was a routine task for them and did not demand any special skills on their part.

The aircraft after taking off had moved around 20 Km from the station when around 1 PM the pilots experienced some technical problem in handling the flight. The technical snag soon turned serious prompting the pilots to attempt an emergency landing. But the aircraft could not be controlled and crashed at Darbar Chapori, a sand bar in the Brahmaputra in the northern part of Majuli district of Assam. The aircraft went up in flames in which both the pilots were severely wounded and later succumbed to their injuries. Wg Cdr J James was a dedicated soldier, and a fine officer, who laid down his life in the service of the nation.

Wg Cdr J James is survived by his wife and father.