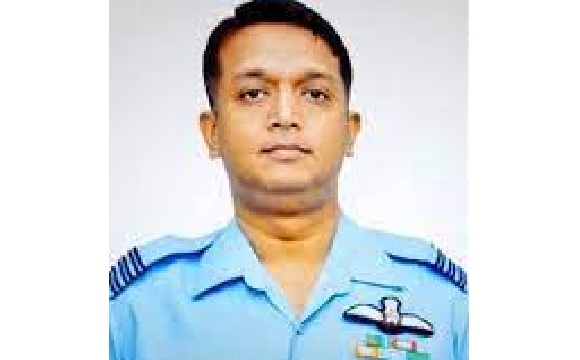 Place of birth : Lucknow, (UP)

Wing Commander Harshit Sinha hailed from Lucknow in Uttar Pradesh. Son of Shri Hemant Kumar Sinha, he had a strong desire to join the armed forces right from his childhood, which grew along with his age. He did his schooling from City Montessori School, Mahanagar in Lucknow.  After completing his schooling, he got selected for the NDA in the year 1999. He joined the 104th NDA course and was part of the 'Oscar' squadron during the training. He passed out of NDA on 01 June 2003 and went to the Air Force Academy for further training.

He got trained as a fighter pilot and passed out as part of 173 Pilots' Course. He got commissioned as a Flying Officer in the fighter stream in the year 2004. After completing his training, he served in varous Air Force bases operating different types of fighter aircraft. After serving for few years, he got married to an Air Force officer Priyanka in 2007, who later retired as a Squadron Leader after completing her short service stint with the IAF. In the following years the couple was blessed with two daughters. By 2021, he had put in around 17 years of service and had been promoted to the rank of Wing Commander. By that time Wg Cdr Harshit Sinha had evolved into a professionally competent fighter pilot with substantial experience in various air operations.

During Dec 2021, Wg Cdr Harshit Sinha was serving with 51 Sqn, known as 'Sword Arms" based at Air Force Station Srinagar. The 51 Squadron was raised at Chandigarh on 01 Feb 1985 with Wing Commander Virendra Kumar Chawla as its commanding officer and then moved to Srinagar. The squadron was initially equipped with Mig-21 Type-75 and later converted to MIG-21 Bison in Jan 2004. The squadron thereafter lived up to its motto, 'Valour for Victory'  in various exercises, operations and campaigns.  During peacetime training is one of the most important activities of IAF which helps it to remain prepared to take on any eventuality. Wg Cdr Harshit Sinha was detailed to undergo one such training exercise at Jaisalmer.

Wg Cdr Harshit Sinha as planned flew from Srinagar to an Air Force base in Rajasthan along with his combat team. An operational mission was planned on 24 Dec 2021 as part of the complex air exercise. Wg Cdr Harshit Sinha was part of the operational mission that entailed complex air manoevers and combat actions. However after taking off, the aircraft developed some serious technical snag and became uncontrollable. Wg Cdr Harshit had no choice but to eject. Wg Cdr Harshit  using his flying skills probably tried to manoevre the aircraft away from residential area of the village to minimize the loss of life and property. But eventually the aircraft crashed near 'Desert National Park' area near Jaisalmer at around 2030 hrs on 24th Dec 2021. However Wg Cdr Harshit could not survive the crash and succumbed to his injuries.  Wg Cdr Harshit was a committed soldier and a gallant air warrior who laid down his life in the service of the nation.