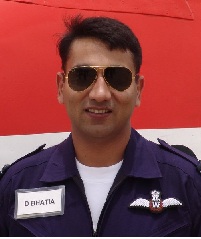 Wing Commander Dheeraj Bhatia hailing from New Delhi, was a fighter pilot of the IAF. He had joined the flying stream of the IAF in 1995, and gained experience of flying various fighter aircraft available in the IAF. Later he was selected to join the prestigious SKAT squadron based in Air Force station Bidar in Andhra Pradesh.

During 2005-06, Wg Cdr Dheeraj Bhatia was serving with 52 Sqn based at Air Force station Bidar. This sqn also known as SKAT was an aircraft aerobatic demonstration team of IAF. The Kiran aircraft employed in the aerobatic flew at speeds between 200 and 600 kmph during maneuvers and were exploited to the end of its abilities by the SKAT.

The team served as an ambassador of the Indian Air Force to showcase its prowess and professionalism. The aerobatics team always consisted of very experienced and highly skilled pilots as its role demanded flying skills of a very high level. All members of the SKAT were qualified flying instructors and were among the best fighter pilots in the IAF. These pilots whose main job was to fly highly risky aerobatic formations were selected after a rigorous selection process. It was one of the most coveted jobs in the IAF owing to the accolade, admiration, and respect that SKAT enjoyed in the IAF as well as people at large.

Wg Cdr Dheeraj Bhatia is survived by his wife and two daughters.

The bright star my family lost

I am thinking about the bright star my family lost in March of 2006. I think of him very often and the finality of death strikes me hard. I am talking about my Chachu, (my father’s first cousin) Wing Commander Dheeraj Bhatia, an ace pilot with the Indian Air Forces, who died when his plane crashed in Bidar during the routine sortie.

He was a hero, a bright star, young and talented and very passionate about what he did. I must have been 12-13 years old when he became a pilot and visited us in Ranchi. I remember the awe I felt just talking to him. I remember the warmth he oozed and how much I adored him. He was the real hero, charismatic and handsome and very lovable. And then a few years later he was chosen to be a part of the Surya Kiran Team, a team of very highly qualified air force pilots hand-picked for the role.

The entire family was elated and beyond pride. It was such a big deal and such a moment of honor. I remember the time his interview came on TV and how the entire family made it on time to see it. He was one person all the kids in the family looked up to. And then on the fateful day on 18th March 2006 he was killed. It just ended in a flash. He was gone and only memories remained, along with 2 adorable daughters and his wife.

“Chachu you have touched our lives in more ways than I can ever say and I cannot begin to write on how proud the entire family is. If at all you were with us today”.

Why I write this today after almost 5 yrs of the accident is because I am so hurt by some remarks that have been made belittling the armed forces. By the fact that people have the audacity to say that the men in uniform do it for money alone and that this is just a job like any other, and people take it up due to lack of other options. I can never understand what goes in the minds of retards that demean the armed forces.

I salute the heroes and their families. They live by what they believe and die by it too.