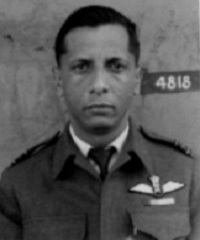 Wing Commander Trevor Keelor was born on 8 December 1934 in Lucknow.  Most of his schooling happened in St. Francis, where his father, Mr Charles Keelor was the headmaster. He had a brother, Denzil Keelor, who was with him right through his life from school to the Air force. Wg Cdr Trevor Keelor right from his school days was very intelligent and an outstanding athlete, hockey player and a boxer. He completed his senior Cambridge examination in 1951 and his intermediate in 1953, along with his brother. He then attended the Le Martiniere college in Lucknow. As students of Le Martiniere, the Keelor brothers were known for their exploits in sports and the boxing ring. He then got commissioned in the Indian Air Force as a fighter pilot along with his brother.

After completing his training Wg Cdr Trevor Keelor as a young Pilot Officer joined the operational unit and soon became known for his bravery and exceptional flying skills. He not only developed exceptional flying skills but also worked hard to have in-depth knowledge about the technicalities and mechanics of the aircraft. Younger pilots admired and adored him and would always seek expert advice from him. Later he got married to Patricia Ann Keelor and the couple had a son, Basil Keelor.

On the 5th Feb 1964, Flt Lt Keelor was given the task to ferry a Gnat from Poona to Palam in a formation of five aircraft. The last part of the flight had to be undertaken at a height of 41,000 feet. When he was at a height of about 15,000 feet while descending, he discovered that there was no response from the engine to the throttle movements.  He handled his Gnat with great precision and brought all his experience into play and achieved the forced landing with any damage to him or the aircraft. He was awarded, “Vayu Sena Medal” for his professional competence, courage and devotion to duty of a very high order.

As the tensions between Pakistan and India escalated in Aug 1965, the IAF was put on high alert and the air assets were moved to their operational locations. As part of that movement 23 Squadron was moved to the Air Force base Pathankot and with two sections of four Gnats each, one led by Squadron Leader Johnny Green and the other by Sqn Ldr Trevor Keelor. Pakistan launched attack on 01 Sep 1965 in the western sector and its forces soon reached Chhamb in Jammu and Kashmir. The Indian Air Force sent 45 Squadron’s de Havilland Vampires to support the Army. But, on the evening of 01 Sept, a Pakistani squadron of F-86 Sabres shot down three Vampires, which was was a serious blow to the IAF.

At 7.30 am on September 3, the Indian radars picked up a Pakistani air patrol at Chhamb. The IAF got a report that some Pakistani fighter planes were encircling the position of the Indian army. Consequently 23 Sqn was tasked to neutralize the enemy threat to the Army. Sqn Ldr Jimmy Goodman flew a decoy ahead of the Gnats and the Pakistani Sabres took the bait and rushed to intercept. The Gnats were not so sensitive to radars, so they remained unseen till two Sabres got caught in the formation. Sqn Ldr Trevor got behind one and shot a mighty Pakistani Sabre F-86, which happened to be the first Pakistani aircraft that the IAF managed to shoot down. This was a big morale booster for the IAF and also gave a big strategic advantage to India. Sqn Ldr Trevor Keelor became an instant hero in his unit and was showered with praises and accolades. Sqn Ldr Trevor Keelor was given the gallantry award, “Vir Chakra” for his cold courage, professional skill and leadership.

Sqn Ldr Trevor Keelor retired from service in 1968 after having completed a glittering career filled with accolades and awards. He breathed his last on 27 April 2002 leaving behind a rich legacy of gallantry and service to the nation.

The citation of Vir Chakra awarded to him as Sqn Ldr reads:

On 3rd September 1965, on receipt of a report that a formation of Pakistani fighters was circling over our Army position in the Chhamb Sector of J&K, a formation of Gnat aircraft was ordered to intercept the intruders. Approaching the area, Sqn Ldr Trevor Keelor, who was a section leader in the Gnat formation, sighted enemy F-86 Sabre jets and engaged them in an air battle. When the combat was in progress, F-104 Starfighters of the Pakistani Air Force also joined in. Unmindful of the numerical superiority of the enemy, Sqn Ldr Keelor chased a Sabre jet and pressed home his attack until the enemy aircraft caught fire and disintegrated in the air. This was the first victory of our Air Force in the air battles against the Pakistani Air Force. In this operation, Sqn Ldr Keelor displayed courage and leadership of a high order in the best traditions of the Air Force.

The citation of  Vayu Sena Medal  awarded to him as Flt Lt reads :

On the 5th February 1964, Flt Lt Keelor was detailed to ferry a Gnat from Poona to Palam in a formation of five aircraft. The last part of the flight had to be undertaken at a height of 41,000 feet [12,497 meters]. While descending to land at Palam, he discovered, at a height of 15,000 feet [4,572 meters] that there was no response from the engine to the throttle movements. After informing the leader, Flt Lt Keelor immediately broke off the formation and attempted a landing at Palam, knowing fully well that previous attempts to force land a Gnat had resulted in fatal or serious injury to the pilot. With great presence of mind and careful handling, he accomplished the forced landing successfully without any damage to the aircraft. Flt Lt Trevor Keelor displayed courage, the presence of mind and a high standard of professional skill in the best traditions of the Indian Air Force.