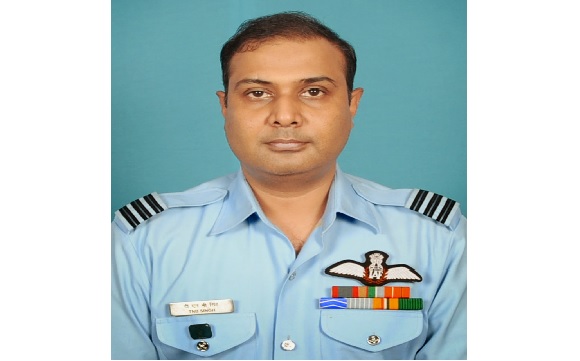 Wing Commander Thakur Narsing Bhagatsingh was born on January 27, 1974, and was brought up in BHEL Colony in Ramachandrapuram, Hyderabad. Son of Shri TD Singh, Wg Cdr Singh during his school days excelled in academics as well as in extracurricular activities. He had a strong desire to join the armed forces right from his childhood, which grew along with his age. After completing his class XII from BHEL Higher Secondary School near Hyderabad, he joined the prestigious National Defence Academy located at Khadakwasla near Pune. Always looking up to the sky for inspiration, he chose to join the Air Force and was commissioned on 16th December, 1995 at the age of 21 years.

He got trained as a helicopter pilot and passed out as part of the 156th Pilots’ Course. As part of his assignments in the Air Force in his younger days, he served in the frontline helicopter unit along the Indo-Tibet border in Sikkim. This is where he met then Flying Officer Jaya Rawat who was posted to a nearby Air Force Station. They got married shortly thereafter and were blessed with a daughter Shanaya in 2005.  In late 2005, he completed his Flying Instructor’s course and later got posted to Air Force Station Hakimpet in June 2008 as a flying instructor. His further assignments included tenure as a Flight Commander in a frontline helicopter unit flying the state of the art Advanced Light Helicopter (ALH) Dhruv and as an Air Force flying examiner based near Delhi.

In December 2013, he got selected to command an ALH unit based at Bareilly. As a Commanding Officer (CO), he strived to bring out the best in his subordinates by motivating them like a true military leader. He played a key role in various Indian Air Force operations including "Operation Rahat" in Uttarakhand and flood relief operations in Kurnool in Andhra Pradesh. Wg Cdr TNB Singh had a cheerful disposition and endeared himself to everyone he worked with. He had a keen interest in sports and excelled in basketball. He was an avid reader and was a great fan of cricket too.

During July 2015, Wg Cdr TNB Singh was serving with 111 HU as its Commanding Officer. 111 HU known as  "Snow Tigers" came into being on 01 Aug 63, under the Command of Sqn Ldr BS Kalra. At that time it was located at Tezpur with MI-4 aircraft, with its main role being causality evacuation and transport support. Later it moved to the Air Force base at Hashimara and then to Bareilly. On 25 July 2014, the unit was tasked for an operational mission to Allahabad from Bareilly. Wg Cdr TNB Singh as captain of the ALH (Dhruv) helicopter along with his co-pilot Sqn Ldr Manu Rajagopal got airborne at 1553 hrs from Air Force Station Bareilly. On the way, the helicopter faced some technical glitches and gave a ‘May Day” call for help, but thereafter lost contact with the Air Traffic Control. However, Wg Cdr TNB Singh and co-pilot Sqn Ldr Manu Rajagopal showed commendable presence of mind and steered the aircraft away from the thickly populated area around Sitapur.

The helicopter eventually crashed near Ataria, about 70 km from Lucknow at around 5 PM. There were no survivors as the air crash proved fatal for the entire aircrew. Besides Wg Cdr TNB Singh & Sqn Ldr Manu Rajagopal the other fallen air warriors included Junior Warrant Officer P Mukherjee, Sergeant D Panda, Corporal Manoj Yadav, Corporal R K Singh and Leading Aircraftsman Dumpa Laxmi Naidu. Wg Cdr TNB Singh was a valiant air warrior and committed officer who laid down his life in the line of his duty following the highest traditions of the Indian Air Force.