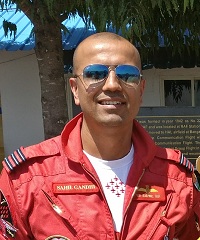 Wing Commander Sahil Gandhi, hailed from Hisar in the state of Haryana. Son of Shri Madan Mohan Gandhi and Smt Sudesh Gandhi, Wg Cdr Sahil completed his schooling from Hisar and joined the National Defence Academy in the year 2000. His father was a banker, while his mother taught at the Home Science College in  Chaudhary Charan Singh Haryana Agricultural University, Hisar. His family members, school teachers and friends fondly called him “Manu” and remembered him as a focused, self-contained and disciplined child.  Wg Cdr Sahil later got married to Ms Himani and the couple had a son Riaan.

By 2019, Wg Cdr Sahil had completed around 15 years of service and evolved into a professionally competent fighter pilot of the IAF. During these years Wg Cdr Sahil had served in various front-line Air Force bases and gained experience in operating various fighter aircraft including the state of the art multi-role Sukhoi-30 aircraft. Wg Cdr Sahil was a committed soldier and a through professional, who commanded respect of his peers and junior as well. He also had a tenure as an instructor where he acquitted very well while training and grooming the young trainee pilots. Later in 2017, he joined the 52 Sqn based at Air Force station Bidar. This sqn also known as SKAT was an aircraft aerobatic demonstration team of IAF. The Hawk aircraft employed in the aerobatic were exploited to the end of its abilities by the SKAT.

The team served as an ambassador of the Indian Air Force to showcase its prowess and professionalism. The aerobatics team always consisted of very experienced and highly skilled pilots as its role demanded flying skills of a very high level. All members of the SKAT were qualified flying instructors and were among the best fighter pilots in the IAF. These pilots whose main job was to fly highly risky aerobatic formations were selected after a rigorous selection process. It was one of the most coveted jobs in the IAF owing to the accolade, admiration, and respect that SKAT enjoyed in the IAF as well as people at large. Wg Cdr Sahil was among the ace pilots who had flown fighter aircraft extensively and joined the famed SKAT. The pilots followed a rigorous training schedule to practice for daredevil aerobatics to achieve the desired level of perfection.

During 2019, Wg Cdr Sahil was chosen to be part of the team that was tasked to take part in the prestigious air show scheduled to be held in Feb 2019 in Bangalore. Wg Cdr Sahil was known to be among the best fighter pilots of the Indian Air Force and had the experience of flying the Sukhoi-30, Mirage 2000 and MiG 21s before joining the SKAT. He was selected among the best pilots of the Indian Air Force to train on the Hawks in United Kingdom for two years before the aircraft was inducted into the IAF in the mid-2000s. The squadron chalked out the training schedule in detail for the air show and Wg Cdr Sahil trained along with his comrades as per their training schedule for various formations planned for the air show.

On 19 Feb 2019 Wg Cdr Sahil’s training task included practicing difficult spin manoeuvers along with his team mates. As the spin manoevere was underway, at around 1150 hrs, the two Hawk jets spiralled out of control mid-air, causing a collision. There were three air crew in the two aircraft and all of them undertook emergency measures as per the SOP(Standard Operating Procedure) and ejected. The other two pilots,  Wg Cdr Vijay Shelke and Sqn Ldr Tejeshwar Singh got away with minor injuries but Wg Cdr Sahil sustained serious injuries. Wg Cdr Sahil later succumbed to his injuries and was martyred. Wg Cdr Sahil was a dedicated soldier and a competent air warrior who laid down his life in the line of his duty. After the crash, IAF’s Surya Kiran aerobatic team flew the first formation paying tribute to Wg Cdr Sahil Gandhi as an incomplete diamond with his  place vacant as a tribute to him.