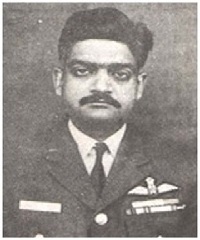 Wg Cdr Padmanabha Gautam was born on 23 July 1933, and grew up in Indore, where both his parents were academicians. His father Mr. Neelkanta Padmanabha was a physics professor, and later the principal, at Ahalyabai Holkar College. His mother was also a teacher; and retired from directorship of educational establishments only at the age of 90.  Wg Cdr Gautam joined the 3rd course at the JSW, the early predecessor of the NDA which was in Dehra Dun at that time.

Wg Cdr Gautam got trained as a pilot at Begumpet, with the 60th Pilots’ Course, and was commissioned on 1st April, in 1953. His first spells of squadron service were with a Spitfire / Vampire squadron, in Halwara; and then with a Toofani squadron. By 1956 he had been selected for the Flying Instructors’ School, FIS. From 1957-58, he was an Instructor at the Air Force Flying College in Jodhpur, instructing on Harvard aircraft. In 1958 he converted to the Canberra, at the Jet Bomber Conversion Unit( JBCU), in Agra.

In the early 1960s, Wg Cdr Gautam got posted to Iraq, as an instructor and flew MiG-15s, and MiG-17s aircraft during that period. From late 1961 to early ’62 he served with the 5 Sqn Detachment, in the first Indian-manned UN peacekeeping mission in the Congo.  Wg Cdr Gautam received the first of his gallantry decorations, a VM, for his contributions there.

At the time of the 1965 ops he was back at the JBCU, commanding it. The JBCU and its instructors participated in the operations like any operational squadron, and distinguished themselves by particularly deep penetration and target marking. Wg Cdr Gautam flew missions with such characteristic elan, that even Pakistani chroniclers mentioned them, with some respect and admiration.  Wg Cdr Gautam received his first MVC during these operations.

By the time of the 1971 war, he was the CO of 16 Squadron, flying out of Gorakhpur. At the end of that brilliantly successful campaign, Wg Cdr P Gautam received a bar to his MVC, one of only two people in the IAF to be so honoured. In early 1972 he was posted as Officer in charge Flying at Air Force Station Poona (now Pune). On 25 November 1972, he  took off on a Mig – 21 aircraft , however immediately after the take off, the engine of the aircraft flamed off  and he was forced to crash-land the  aircraft. During the process of landing he was injured and  finally succumbed to his injuries owing to internal bleeding.

Wing Commander Gautam was one of the most decorated Indian Air force officer. He led many important missions during both the wars and  had inflicted  heavy injury and thereby crippled the capability of war waging of adversary.  His audacious bombing on enemy territory deep inside their country speaks of his courage, commitment and dedication to the Nation. He was one of the few officers who was awarded the prestigious Maha Vir Chakra twice; once for  1965 war and later  for his heroics during 1971 war.

The citation for the first Maha Vir Chakra awarded to him reads :

Squadron Leader P. Gautam, Commanding Officer of a bomber conversion-training unit led it in a number of difficult and dangerous missions. He undertook six important offensive and tactical close-support operations over Pakistani territory during the period from 6 to 21 September 1965. In complete disregard of personal safety in the face of heavy enemy ground fire and of the risk of attack by Pakistani Sabrejets, he carried out his missions successfully with courage and determination. These missions included reconnaissance deep into enemy territory and the bombing of Akwal and Gujarat airfields and enemy troops concentrations in the Gujarat and Chawinda areas.

Throughout the operations, Squadron Leader P Gautam’s devotion to duty, professional skill, and gallant were in the finest traditions of the Air Force.

The citation for the second Maha Vir Chakra awarded to him reads :

Wing Commander P Gautam, Commanding Officer of a bomber squadron, led many missions deep into enemy territory. Notable among these were two raids on the night of the 5 and 7 December 1971 when Wing Commander Gautam led attacks on the Mianwali airfield. On both these occasions, he and his formation were met with intense anti-aircraft fire. Despite that, the target was attacked with great precision at low level and heavy damage was inflicted. On the other missions, he carried out rocket and four gun attacks on railway marshalling yards in the Montgomery-Raiwind area with conspicuous success. Throughout the operation, Wing Commander  Gautam displayed conspicuous gallant, exemplary flying skill and leadership in the highest traditions of the Air Force.