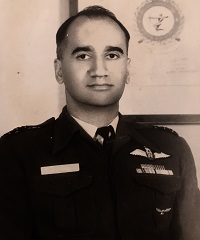 Wing Commander Hersern Singh Gill was born 6th July 1933 in Nowshera (Now in Pakistan). Son of an Army veteran Maj Pooran Singh Gill, he later moved to Delhi for his higher studies. Subsequently his family moved to Bareilly, when his father who served in the Army in the Army Medical Corps retired from the active service. He later got selected to join the Indian Air Force and was commissioned on 16 Jan 1954 at the age of 20 years. He was trained as a fighter pilot and gradually gained experience in flying various fighter aircraft of the IAF.

He became one of the first pilots to be selected to fly a highly sophisticated aircraft introduced in the Indian Air Force. He achieved a Master Green instrument rating on MiG-21 aircraft and became an Instrument Rating Instructor. A pilot of outstanding ability, he set the pace for the highest standards in his squadron. He was twice selected for low-level aerobatics displays and in recognition of his outstanding skill once a visiting dignitary awarded him his country’s “ Class I Pilot’s Brevet ”on the spot. By the year-1971, he had been promoted to the rank of Wing Commander and developed into an ace fighter pilot with expertise in diverse air operations.

During the operations against Pakistan in December 1971, Wg Cdr Hersern Singh Gill was commanding a Fighter Squadron operating MiG -21 aircraft based in the Western sector. When Pakistan Air Force attacked various air basis of the IAF on 3rd Dec 1971, 47 Sqn got involved in various air operations against the enemy forces. As commanding officer of 47 Sqn, Wg Cdr Hersern Singh Gill led several operational missions on air defense, close support, and counter-air operations from 3rd Dec onward. He led from the front like a true military leader and inspired his pilots. His Squadron shot down successfully one enemy F-104 aircraft over Jamnagar on 11th Dec 1971 and hit another F-104 aircraft on 12th December 1971.

On 12th Dec 1971, Wg Cdr Gill undertook a strike mission over the Badin Signals Unit Complex in Pakistan in the face of intense enemy Anti-Aircraft fire. On 13th December 1971, he led another strike mission on the same target. The target was heavily defended by enemy air defense assets and entailed great risk. Despite that, displaying extraordinary courage and professional skill, Wg Cdr Gill pressed on with the attack. However, during this attack, his aircraft got hit by the enemy Anti-Aircraft guns and crashed. Wg Cdr Gill ejected and is presumed to have been taken over as a POW (Prisoner of War). He was captured and his name was subsequently announced on Pakistan radio, the same day, as captured “ace Indian pilot”. However, successive regimes in Pakistan have denied the existence of Indian PoWs in its jails. Wg Cdr Gill was given the gallantry award, “Vir Chakra” for his exceptional courage, leadership and professional skill of a very high order.

During the operations against Pakistan in December, 1971, Wing Commander Hersern Singh Gill was commanding a Fighter Squadron in the Western Sector.  He led several operational missions on air defence, close support and counter air operations during the period from 3rd December, 1971 to 13th December, 1971. He set an inspiring example to his pilots with his fearless approach, flying skill and dedication to his duties. His Squadron shot down one enemy F-104 air craft over Jamnagar and hit another F-104 aircraft on 11th and 12th December, 1971, respectively. Disregarding his personal safety, and with great courage and skill, he undertook strike missions over the Badin Signals Unit Complex in the face of intense enemy Anti-Aircraft fire.  On the 13th December, 1971, he undertook another strike mission on the same target.  During this attack his aircraft was shot down by the enemy Anti-Aircraft fire.

Wing Commander , then Squadron Leader , Hersern Singh Gill was one of the first few to be selected to fly a highly sophisticated aircraft (*) introduced into the Indian Air Force. A pilot of outstanding ability, he set pace for the highest standards in his squadron. He was twice selected for low level aerobatics displays and in recognition of his outstanding skill once a visiting dignitary (**) awarded him his country’s “ Class I Pilot’s Brevet ”on the spot.

* MIG 21 for which he was sent to USSR for training before induction.