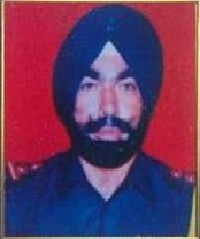 Subedar Surinder Singh was a soldier of  Sikh Regiment of Indian Army. During the year 2002, he was serving in the 3rd Battalion of the Sikh Regiment.

On 3 March 2002, Subedar Surinder Singh and his platoon spotted a group of terrorist near the LOC in the Rajouri sector of Jammu and Kashmir. The soldiers did not fire and waited for the militants to close in. When the group was hardly a few meters away subedar Surinder sprang up and shot one of them dead. At this, the terrorists dispersed into the jungles and Singh then organised a search party and went after them. During the operation, he came under fire from behind a boulder. With utter disregard to his personal safety and with bullets whizzing about, the subedar was crawling forward when a terrorist pounced upon him. In the ensuing close combat Surinder Singh shot him dead. Four other terrorists sneaked into a house in Village Tarala and started firing at the soldiers. Seeing this  subedar Surinder climbed on the roof of the house and blew it up with grenades. While the subedar was retreating after creating the opening, the terrorists threw a grenade at him from which he suffered splinter injuries. Unmindful of his injuries, Singh killed two more terrorists. Later while being evacuated from the place, Singh succumbed to his injuries. His team killed two more terrorists and eliminated the threat. Subedar Surinder showed great presence of mind and raw courage in this operation.

For his bravery, Subedar Surinder Singh was awarded posthumously the Ashoka Chakra,  the highest peacetime military decoration in India

“I wish he was alive and both of us could have gone to accept the Ashok Chakra. I would have been happier then,” says Santosh Kaur, Surinder’s wife.

“I sent my son to join the Army for the country. I am happy that he fulfilled his duty and sacrificed his life for the motherland,” says Khazan Singh, Surinder’s father.

“He was my friend and whenever we talked he would say he would never show his back to the enemy,” recalls Kali Dass, a friend of Subedar Surider from his villager.