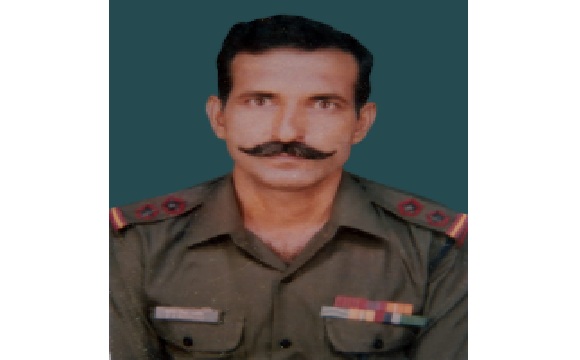 Subedar Sumer Singh Rathore hailed from Dudhwa khara village of Churu district in Rajasthan. Son of Shri Dungar singh Rathore and Smt Kamal Devi, he was born on 15 Aug 1955. After completing his schooling he joined the Indian Army on 26 Apr 1975 at the age of 19 years. He was enrolled into 2 Raj Rif battalion of the Rajputana Rifles, an infantry Regiment known for its gallant soldiers and glorious history of numerous battle exploits.

After serivng for few years, he got married to Ms Kamla Kanwar and the couple had two sons Narender Singh & Himat Singh and a daughter Anita Kumari. By the year 1999, he had put in around 24 years of service and had been promoted to the rank of Subedar. By then he had served in various field areas and developed into a dependable Junior Commissioned Officer. During his service he took part in various operations and proved his mettle as a soldier many a times. The significant operations that he participated included Op Orchid (1976-77), Op Blue Star (1984), Op Black Thunder (1986-88) and  Op Rakshak (1994-95).

During the Kargil war Sub Sumer Singh Rathore's unit 2 Raj Rif was deployed in Kargil sector as part of "Op Vijay". In the early days of May 1999, after patrols sent in the mountains of Tololing disappeared, 18 Grenadiers were given orders to evict the intruders. Tololing,  a high mountain, loomed large rising to 16000 feet, overlooking the town of Drass. With no cover, a single steep track led to the top  and there was absolutely no cover for climbing troops. From this vantage point, the enemy brought in heavy artillery fire on the National Highway NH 1A which was closest at this point.

After several unsuccessful attempts a fresh battalion of 2nd Rajputana Rifles was brought in for the assault. The Grenadiers consolidated at 3 points, 300 metres below the Pakistani positions thus providing a foothold to launch the attack from. The 2nd Raputana Rifles meanwhile fired and tested weapons, carried on reconnaissance and mock assaults on nearby ridges. About 90 soldiers led by Major Vivek Gupta were tasked for the final assault. Sub Sumer Singh Rathore was part of the team that was assigned the critical task.

On 12 June 1999, at 1830 hours 120 artillery guns opened up on Tololing top. The Bofors 155 mm guns started first. Used in direct fire mode they targeted the bunkers. Within minutes they were followed by the 130 mm and 105 mm guns. Shell after shell slammed into the ridges. As the expected Pakistani counter bombardment started, the 155 mm guns switched to firing across the LOC at Pakistani gun positions located by the para commandos. The Pakistani guns were soon put out of action and were relegated to occasional shells. When ,close to midnight the firing stopped, Major Vivek Gupta led his men with the battle cry “Raja Ramchandra ki Jai”. There were 3 teams code names “Abhimanyu”, “Bheem” and “Arjun”. One went straight up. Another went around a lower ridge to cut off the enemy’s retreat and a third from behind. The Grenadiers provided covering fire against the Pakistanis on the nearby ridges.

Sub Sumer Singh Rathore was the Mortar Fire Controller for Charlie Company during the assault. During the attack he saw Sub Bhawar Lal, platoon Commander, with leading section falling, after being hit by enemy's light Machine Gun bursts. Seeing Maj Vivek Gupta also coming under heavy enemy fire and his party being heavily outnumbered Sub Sumer Singh took charge of a section and led it from a flank. Leading the section Sub Sumer Singh brought down heavy and accurate fire onto the enemy. However while doing so, Sub Sumer Singh was hit by a volley of bullets in the abdomen. But undeterred he continued to fire at the enemy and eventually managed to destroy it by lobbing grenades. He finally succumbed to his injuries and was martyred. Sub Sumer Singh was a valiant soldier and committed Junior Commissioned Officer who laid down his life in the line of his duty.

The Citation for Sena Medal awarded to him reads:

Subedar Sumer Singh Rathore was the Mortar Fire Controller for Charlie Company during the assault on tooling a fortified enemy position at 15,000 feet. During the attack he saw Sub Bhawar Lal, platoon Commander, with leading section falling, after being hit by enemy's light Machine Gun bursts. Seeing Maj Vivek Gupta also coming under heavy enemy fire and his party being heavily outnumbered Subedar Sumer Singh took charge of a section and led it from a flank. Under his command his section brought down heavy and accurate fire onto the enemy. During the charge he was hit by a volley of bullets in the abdomen. In spite of being grievously wounded he continued to fire at the enemy and encouraging his men led the charge on to the dominating enemy bunker, destroying it by lobbing grenades before finally succumbing to injuries. It was his valiant action beyond the call of duty that facilitated the advance of the company and ultimately resulted in the capture of the heavily held enemy position.

The Junior Commissioned Officer displayed rare courage in the face of the enemy and laid down his life in richest tradition of the Indian Army.