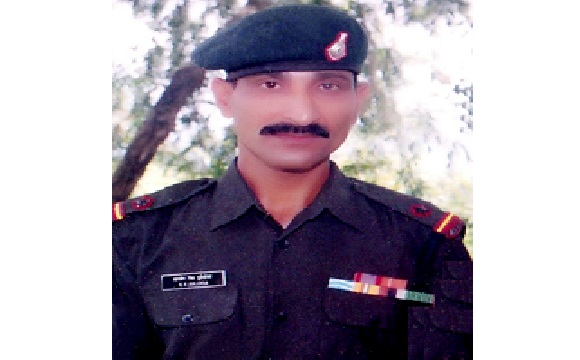 Subedar Shamsher Singh hailed from Dodar village of Sarkaghat Tehsil in Mandi district of Himachal Pradesh. He completed his primary education from Government School Rakhoh and subsequently studied from Government School Sarkaghat. After completing his schooling, he joined army on 05th Aug 1977. He was recruited into 1 JAK Rif battalion of the well known Jammu and Kashmir Rifles Regiment, an infantry regiment widely respected for its intrepid soldiers and numerous battle exploits.

After serving for few years, he got married to Ms Kamlesh Kumari and the couple had three children. During his service spanning over two decades he served in various field areas and took part in many significant operations. The many important operations that he was part of included Operation Savage in Sikkim (Feb 1983- June 1983), Operation Rakshak (1991-1993), Operation Hifazat (Feb 1998- Sep 1998) , Operation Vijay (July 1999- Dec 1999). He also served in field areas located in Pithoragarh, Ladakh, Kashmir valley and Andaman. By the year 2002, he had put in over 25 years of service and had been promoted to the rank of Subedar. By that time he had served in various challenging operational areas and developed into a tough soldier and dependable Junior Commissioned Officer.

During 2002,  Sub Shamsher Singh was serving with 1 JAK Rif battalion deployed in J&K. As a number of militants were active in the unit’s AOR(Area of Responsibility), the unit troops had to maintain a very high state of preparedness at all times and had to undertake operations at a short notice. Based on the information from the intelligence sources, about the presence of some hardcore militants in unit's AOR, the unit decided to launch a search and cordon operation on 26 Dec 2002. Sub Shamsher Singh was detailed as a search party commander for the operation. As planned Sub Shamsher Singh along with his soldiers reached the suspected area and launched the search operation.