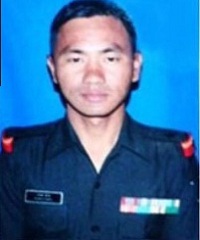 Sub Raman Thapa hailed from Tulsipur Village in Rependehi district of Nepal. Sub Raman Thapa joined the army in 1996 and was recruited into 2/8 GR battalion of 8 Gorkha Rifles Regiment, a Regiment known for its gallant soldiers and numerous battle exploits.

By 2018, Sub Raman Thapa had put in nearly 22 years of service and had the experience of working in various operational areas with different terrain and working conditions.

During Dec 2018, Sub Raman Thapa’s unit 2/8 GR was deployed in the Keran Sector near LOC in Kupwara district of J & K. The unit was manning the forward posts in Kupwara district and the soldiers were required to be on high alert all the time as the sector was prone to unprovoked firing by the Pakistani forces.  On 21st Dec, Sub Raman Thapa was deployed at the forward post in Peer Baba Grahat along the LOC in Jumgund area in Keran Sector. This sector near the LOC is very volatile as the enemy forces often resort to unprovoked shelling from across the border.

On 21st Dec, the sniper shots were fired near Peer Baba Grahat post of 2/8 GR battalion by the Pakistani army. The army retaliated in a befitting manner resulting in a heavy exchange of fire. During this firing, Sub Raman Thapa got wounded seriously and was immediately evacuated and rushed to the Military Hospital at Dragmulla. Later he was shifted to 92 Base Hospital at Srinagar for advance treatment. However, he succumbed to his injuries and was martyred. Sub Raman Thapa was a valiant and committed soldier who at the age of 39 years laid down his life in the service of the nation.

Sub Raman Thapa is survived by his wife and son.