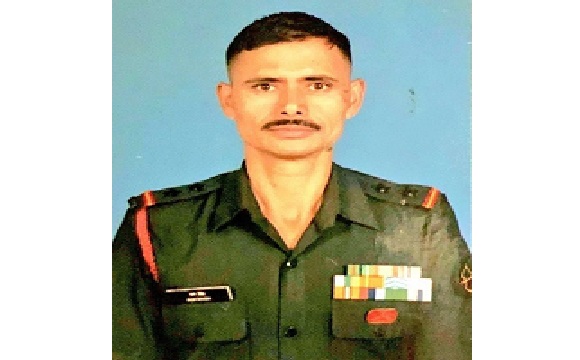 Subedar Ram Singh Bhandari originally hailed from Pauri Garhwal district of Uttarakhand but the family later moved to Meerut in Uttar Pradesh. Son of Shri Diwan Singh, Sub Ram Singh born in the year 1965 and was inclined to join the Army since his younger days. He eventually joined the Army after completing his school education in the year 1982 at the age of 17 years. He was recruited into 16 Garhwal Rifles of the Garhwal Rifles Regiment, an infantry Regiment known for its brave soldiers with a rich history of various battle honours.

After serving for few years, he got married to Ms Anita Devi and the couple had four daughters Priyanka, Karishma, Meenakshi & Manisha and a son Solen. In his service spanning over two decades, he participated in many challenging operations. He served as an instructor in various training institutes and was also part of Indian contingent of UN mission in Congo in the year 2014. By the year 2021, he had put in over 29 years of service and had been promoted to the rank of Subedar. By that time he had served in various demanding operational areas and developed into a tough soldier and dependable Junior Commissioned Officer. In the year 2019, Sub Ram Singh was deputed to serve with 48 RR battalion, deployed in J&K for counter-insurgency operations.

During Aug 2021, Sub Ram Singh‘s unit 48 RR was deployed in Rajouri district of J&K. The unit troops were engaged in operations against the terrorists on a regular basis as the unit's area of responsibility (AOR) was active with militancy. The LOC located near to its AOR, remained highly active and volatile with ceasefire violations occurring very often and without any warning. The area was also prone to infiltration, which necessitated regular armed patrols to check any infiltration from across the border. Following inputs from the intelligence sources about the presence of some terrorists, the security forces including the troops of 48 RR launched a search operation in Kangota area of Rajouri district. Sub Ram Singh was part of the team that launched the search and destroy operation.

As planned Sub Ram Singh and other troops reached the suspected area in Thanamandi in Rajouri district and launched the search operation. On seeing the troops, the terrorists opened fire and a fierce gun battle ensued thereafter lasting several hours. Sub Ram Singh and his comrades successfully neutralized two terrorists and continued to corner other terrorists. However Sub Ram Singh received gun shots during the fierce exchange of fire and got severely injured. He later succumbed to his injuries and was martyred. Sub Ram Singh was a valiant soldier and committed JCO, who laid down his life in the line of his duty. He was given the gallantry award “Sena Medal” (posthumous) on 15 Aug 2022 for his exceptional courage, devotion to duty, and supreme sacrifice.