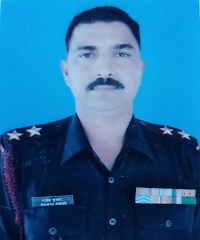 Subedar Rajesh Kumar hailed from Kalichpur Kalota village in Mukerian tehsil of Hoshiarpur district in Punjab. Son of an army veteran Hav Ram Chander, Sub Rajesh Kumar had three sisters as siblings. He was inclined to serve in the Army like his father since his younger days. He eventually joined the Army after completing his school education at the age of 19 years. He was recruited into 60 Med Regt of the Regiment of Artillery, an important combat support arm of Indian Army known for its booming field guns. The Regiment of Artillery has various Regiments that include Medium Regiments, Light Regiments, Missile Regiments, Rocket Regiments and SATA (Surveillance & Target Acquisition) Regiments with every Regiment having its own equipment during wartime.

After serving for few years, he got married to Ms Anita Devi and the couple had a daughter Riya and a son Jatin. By the year 2020, he had been promoted to the rank of Subedar and had developed into a proud gunner and a very dependable junior commissioned officer. He had served in various operational areas by then and gathered substantial field experience in operating various weapon systems of the Regiment of Artillery. After serving for some years with his parent unit, Sub Rajesh Kumar was deputed to serve with 43 RR battalion deployed in J&K for counter-insurgency operations.

During Sep 2020, Sub Rajesh Kumar’s unit was deployed in Rajouri district of J&K. The unit troops were engaged in counter-insurgency operations on a regular basis as its AOR (Area of Operation) was affected by active militancy. The LOC remained highly active and volatile with ceasefire violations occurring very often and without any warning. Like previous years the year 2020 too continued with ceasefire violations. Pakistan continued to violate the 2003 ceasefire agreement with India despite repeated calls for restraint and adherence to the pact during flag meetings between the two sides. In yet another case of ceasefire violation, Pakistani troops opened unprovoked fire in Rajouri along the LOC on 01 Sep 2020.

In the night of 01/02 Sep 2020, Pakistan Army troops initiated unprovoked firing on Indian posts from across the border in Rajouri district. During that period, Sub Rajesh Kumar was supervising an operation meant to provide support to other infantry and artillery units deployed in the forward area along the Line of Control. The Pakistani troops violated the ceasefire and resorted to heavy cross border firing using small arms as well as heavy caliber weapons. Indian army responded in a befitting manner to the Pakistani aggression and consequently, a heavy exchange of fire ensued thereafter, which continued intermittently for several hours. However, during this heavy exchange of fire, Sub Rajesh Kumar got seriously injured. He later succumbed to his injuries and was martyred. Sub Rajesh Kumar was a gallant soldier and a committed junior commissioned officer, who laid down his life in the line of his duty.