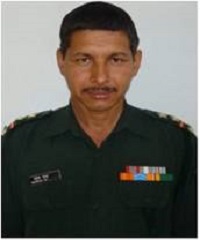 Subedar Prakash Chand hailed from Pithoragarh in Uttarakhand. Son of Sri Jaman Chand and Smt Jamna Devi, Sub Prakash Chand was recruited into the 8 Kumaon of the famed Kumaon Regiment, known for its valour and battle honours in various operations. During 2013, his unit was deployed in the terrorist-infested area in J & K.

On 28 Oct 2013, Subedar Prakash Chand was leading an anti infiltration patrol from Bhim Post to Kaman Post at Baramulla district of Jammu and Kashmir.  At about 0015 hrs, the patrol came under heavy automatic fire from across the LOC. Sub Prakash Chand in a swift action ordered the patrol to adopt lying position and launched the counter offensive attack. Sub Prakash Chand using his well honed field craft coordinated and directed fire of his patrol towards the terrorists.

The citation for the “Shaurya Chakra” awarded to him reads:
On night 28 October 2013, Subedar Prakash Chand was leading an anti infiltration patrol from Bhim post to Kaman post at Baramulla district of Jammu and Kashmir. At about 0015h, the patrol was fired upon from across the LOC with heavy volume of Small Arms, Under Barrel Grenade Launcher and Rocket Propelled Grenades. Subedar Prakash Chand in a swift action ordered the patrol to adopt firing position and returned fire. While bringing his own men to safety, Subedar Prakash Chand sustained a splinter injury on his right thigh. Bleeding profusely with grievous injury the JCO continued firing and directing his men to safety during which he again received a fatal splinter injury on his head which killed him instantly. Subedar Prakash Chand fought valiantly till his last breath befitting the highest traditions of Indian Army.