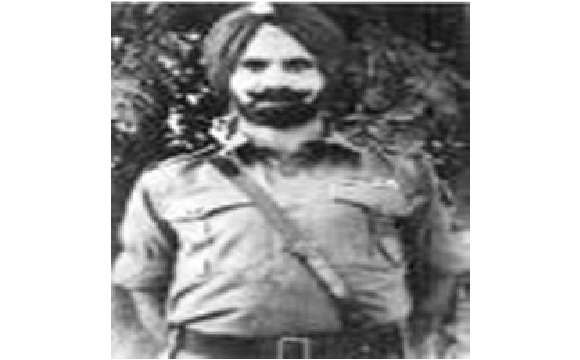 Subedar Malkiat Singh hailed from Lohat Baddi village in Sangrur district of Punjab and was born on 31st May 1929. Son of  Shri Gurcharan Singh, he joined the army at the age of 18 years on  05th May 1947.  He was recruited into the 14 Punjab battalion of the Punjab Regiment, one of the most decorated infantry Regiments of the Indian Army. By the year 1971, he had put in around 24 years of service and had been promoted to the rank of Subedar. By then he had served in various field areas and developed into a committed soldier and dependable Junior Commissioned Officer.

The town of Garibpur was one of the most important strategic areas to be captured before the move to complete the encirclement of Jessore city in Bangladesh. Sub Malkiat Singh and his comrades crossed the Boyra border in West Bengal, and entered Bangladesh, crossing the Kabadak river from the south on the 20th of Nov 1971. By the 21st of November, the Battalion entered Garibpur and dug in defenses as the Pakistani 107th Infantry Brigade was approaching to launch a heavy counter-attack. The C squadron of PT-76 tanks, led by Major Daljit Singh Narag of the 45 Cavalry crossed the border on 20th of November and formed up with the Battalion.
As the Pakistanis launched their counter-attack on the night of 21 November,14 Punjab and the 45 Cavalry engaged the enemy boldly inflicting massive casualties on them. Sub Malkiat Singh at that time was defending a position with his platoon that was under constant and fierce Pakistani armored and infantry attacks. He moved from trench to trench encouraging and motivating his men to hold position and repulse the attacks. When enemy troops were 50 metres from his position, he crawled forward and engaged the enemy forces. He was successful in killing two Pakistani machine gunners, but was grievously wounded by a tank shell. He later succumbed to his injuries and was martyred. Throughout the operations, Sub Malkiat Singh displayed commendable bravery, leadership and fighting spirit.

Subedar Malkiat Singh was  given the nation’s second highest gallantry award “Maha Vir Chakra” for his raw courage, unfaltering leadership and act of supreme sacrifice beyond the call of duty. Sub Malkiat Singh is survived by his wife Smt Gurdev Kaur.

The citation of Maha Vir Chakra awarded to him reads:

Subedar Malkiat Singh was commanding a platoon of a battalion of Punjab Regiment, which was occupying a defended area on the Eastern Front. His position was attacked in strength by Pakistan infantry and armour Subedar Malkiat Singh moved from trench to trench encouraging his men. The enemy came within 50 yards and subjected his position to effective light machine gun fire and grenades from covered positions. With utter disregard for his own safety, he crawled forward to engage the enemy and, even though wounded, killed two enemy machine gunners before he was hit by an enemy tank as a result of which he died.