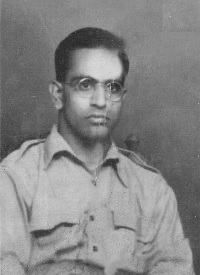 Subedar Latteri Venkata Subbayyar Srinivasan was born on 12th August 1915, in the village of Latteri in Vellore District of Tamil Nadu. Subedar LV Srinivasan was the son of Mr.Latteri Venkatasubbayyar. He did his earlier education in RBANM High School, Ulsoor Banglore. He was very much interested to join the army. As soon as he completed his education he joined the army at the age of 21 and he enrolled into Royal Indian Army Service Corps on 4th June 1936.

Sub Srinivasan was married to Mangalam from the same village of his native and this couple had six children, five sons, and one daughter. During his service period, Sub Srinivasan was posted to various places including Egypt, Iraq, and Indo- Burma Border. In the year of 1944,  he was awarded Africa Star.

Subedar Srinivasan field services included Egypt from 1941-1942, Iraq 1942-1943 and Indo- Burma Border from 16-11-1943 to 15-5-1944. After the independence, he was posted at Bangalore, Bombay and the Army Headquarters at New Delhi. Sub Srinivasan last assignment was in the Northeast of India.

In the year 2000, he was awarded a Medallion and commendation through the officer commanding AKKTN, Chennai.