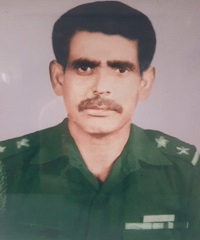 Arm/Regt :The Regiment of Artillery

Subedar Kelash Singh hailed from Bhondse village in Gurgaon district of Haryana. Son of Shri Pahlad Singh, Sub Kelash Singh was born on 02 Oct 1956 and completed his schooling in his hometown. As he was inclined to serve in the Armed Forces since his childhood, he joined the Army at the at age of 18 years on 29 Oct 1974. He was recruited into the Regiment of Artillery, the combat support arm of the Army, known for its booming field guns at the border. With its motto, ” Sarvatra Izzat-o- Iqbal” meaning  ” Everywhere with Honour and Glory”, the Regiment of Artillery is the second largest arm of the Army after Infantry and operates various guns, mortars, and rocket launchers. Sub Kelash Singh over a period of time gained proficiency in various weapon systems of his Regiment and developed into a competent soldier.

After a couple of years of service Sub Kelash Singh got married to Jainti Devi and the couple had two daughters and a son. Besides being a family man, Sub Kelash Singh was a dedicated soldier who was respected by his juniors and peers as well. By the year 2001, Sub Kelash Singh had become a junior commissioned officer and had put in over two decades of service in the Army. He had served in various operational areas with challenging working conditions and evolved into a battle-hardened soldier.

During 2001, Sub Kelash Singh was serving with 81 Field Regiment deployed in J &  K as part of “Operation Rakshak”. On 18 Jan 2001, Sub Kelash Singh was given an operational assignment and had to move to Jammu by road in the morning.  When he was travelling along with other soldiers, their vehicle was attacked by the militants using an improvised explosive device(IED). The IED blast was carried out at around 0930 hrs in the morning about 40 Kms from Srinagar between Khanabal and Awantipur. The blast was very devastating and Sub Kelash Singh and many other soldiers got grievously injured.

Sub Kelash Singh was shifted to 92 Base Hospital in Srinagar for treatment, but he succumbed to his injuries and was martyred. Sub Kelash Singh was a valiant soldier and a committed junior commissioned officer who laid down his life in the service of the nation. He is survived by his wife Jainti Devi, daughters Seatal Singh and Pratibha Singh and son Sutender Singh.