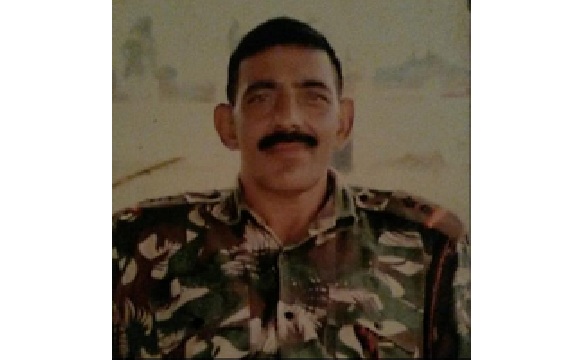 Subedar Kehar Singh hailed from Maharaj Nagar village in Jaisinghpur tehsil of Kangara district in Himachal Pradesh. Son of an army veteran Hav Birbal Singh and Smt Sandho Devi, he always wished to follow in the footsteps of his father and serve in the Armed Forces. Following his interest, he eventually joined the Assam Rifles, the oldest paramilitary force of India with its headquarters at Shillong.

After serving for some time, he got married to Ms Damodri Devi and the couple had three daughters Lakshmi, Reshma, Nikita and a son Raj Kumar. By the year 2003, he had put in substantial number of years of service and had been promoted to the rank of Subedar.

During Jul 2003, Sub Kehar Singh was serving with the 33 Assam battalion deployed in the North East.  As the AOR(Area of Responsibility) of the unit was affected by militancy, the unit troops were engaged in operations against the militants on a frequent basis. The unit launched regular patrols to monitor suspicious activities as part of their operations to keep militancy under check. The militants active in that area invariably belonged to Kanglei Yawol Kanna Lup (KYKL), a terrorist group formed in January 1994 following merger of the Oken faction of the United National Liberation Front (UNLF), the Meiraba faction of People's Revolutionary Party of Kangleipak (PREPAK) and the Ibo Pishak faction of the Kangleipak Communist Party (KCP). On 11 Jul 2003, the unit launched an operation against a militant hideout based on the information from the local intelligence sources. Sub Kehar Singh was part of the team that was assigned the task of undertaking this operation.

As planned Sub Kehar Singh and his troops reached the suspected area in Chandel district of Manipur on 11 July 2003. As the search operation was underway, the militants belonging to Kanglei Yawol Kanna Lup (KYKL) attacked the troops. The militants were heavily armed and hiding in positions of advantage. A fierce gun battle ensued thereafter with heavy exchange of fire from both sides. Sub Kehar Singh deployed his troops tactically and fought with great courage and bravery. However during the operation Sub Kehar Singh received gun shots and got severely injured. He later succumbed to his injuries and was martyred. Sub Kehar Singh was a brave and motivated soldier, who laid down his life in the line of his duty. Sub Kehar Singh was given the nation’s third-highest gallantry award “Shaurya Chakra” for his courage, unyielding fighting spirit and supreme sacrifice.