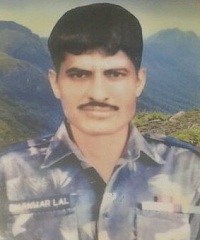 Subedar Bhanwar Lal Bhakar hailed from village Thebari in Nagaur district of Rajasthan. Son of Mr. Bhura Ram and Mrs. Choonki Devi, Sub Bhanwar Lal belonged to the Rajputana Rifles regiment and was serving with 2 Rajputana Rifles in June 1999. During the Kargil war, his unit was deployed in the Kargil sector and played a very important role in the battle for Tololing.

Kargil War: The Battle Of Tololing

Sub Bhanwar Lal played a significant role in capturing the Tololing top during the Kargil war in 1999. The 2nd Rajputana Rifles went into the war when the Indian army did not have enough information about the exact magnitude of intrusion. Sub Bhanwar Lal and his men of the 2nd Battalion, Rajputana Rifles were tasked with the recapture of point 4590 on the treacherous, icy slopes of Tololing in the Drass sector. He was part of a light machine gun commando team who was asked to recapture Pakistani bunkers along the mountain top of Tololing. As with so many of the later operations in Kargil, this too was a dangerous mission requiring an uphill ascent towards entrenched enemy posts who had the advantage of height and a bird’s eye view.

On night 12/13 June 1999, Subedar Bhawar Lal was leading his platoon to capture Tololing Top in the Drass Sector. As they closed in with the objective, the enemy brought down heavy fire on them. The leading section of his platoon suffered three casualties and the attack was stalled temporarily. At this juncture, Subedar Bhawar Lal took the lead and kept motivating his section to move ahead. About 50 meters away from the enemy positions, he got a burst of light machine gunfire. Unmindful of his injuries, he moved ahead with his men and continued to do so till he succumbed to his injuries at the base of the enemy position. Sub Bhawar Lal who displayed inspiring leadership, bravery and made the supreme sacrifice during the capture of Tololing Top was given the gallantry award, ‘Vir Chakra” posthumously.

Subedar Bhawar Lal was awarded Vir Chakra (Posthumous) for his inspiring leadership, bravery and supreme sacrifice during the capture of  Tololing Top in Kargil war.